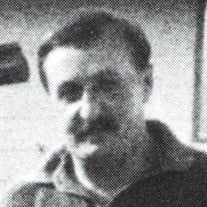 The family members of Jerry Rutledge Sr., 76, of International Falls, Minnesota, are sad to announce his passing at his home on Sunday, July 7, 2019. Jerry was born on January 30, 1943 in International Falls to Raymond and Rose Rutledge Sr. He was a lifelong resident of International Falls. Jerry served in the U.S. Marine Corp. When he returned from the service he worked in the bush logging, and later he went to work for Wagner Construction driving truck and heavy equipment. After leaving Wagner’s he continued doing odd jobs for many years and volunteered helping in the community. Jerry loved spending time with his family. They were the most important thing to him. He was known for his sense of humor and at family gatherings he was always getting everyone involved with some activity or game. He was preceded in death by his parents, Ray and Rose Rutledge; brothers, Ray Jr., Rick, Don; sisters, Marlene Plumridge, Irene Jensen, Mary Ann Rutledge; and son, Jerry Rutledge Jr. Jerry is survived by his son, Steve Rutledge of Bemidji, MN; daughters, Karen Rutledge (Rick) of Braham, MN, and Shannon (Doug) Perreault of Couchiching First Nation, Ontario; eight grandchildren, Steven, Mike, Joe, Justin, Brendin, Leevi, Cathryn, and Brianna; three great-grandchildren; sister, Debra Carr of International Falls, and many cousins and friends. Graveside services with military rites will be held on Thursday July 11, 2019 at 1:00 p.m. at Forest Hill Cemetery.

The family of Jerry Rutledge Sr. created this Life Tributes page to make it easy to share your memories.

The family members of Jerry Rutledge Sr., 76, of International...

Send flowers to the Rutledge family.