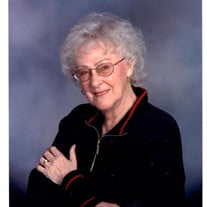 Joann Mildred Sullivan, 93, of International Falls died on Wednesday, April 7, 2021 at her home with her children by her side. Joann was born on April 16, 1927 to parents Raymond and Mae Holler in Winnipeg, Manitoba, Canada. She graduated from Falls High School in 1945. In 1947, she married William (Bill) Sullivan, and they had 5 children. In her early years Joann worked at Iltis Drug Store. She then worked at Boise Cascade as a payroll supervisor until her retirement. Joann loved to travel and had many wonderful trips to Hawaii, Florida and Mexico. She especially loved shopping trips to the Cities and going to casinos with her daughters. She loved spending time with her children and grandchildren. She was passionate about her golfing, fishing, and spending time at the cabin in Canada. She was a member of Faith United Church and attended church as long as she was able. Joann and her school friends stayed together through many adult years. Every month the ladies would get together and they became known as the “Club” girls. She is the last surviving “Club” girl. Holding a special place in her heart were Darlene Lepper, Adeline Hagland, Marion O’Brian, June Polus and Norma Stone. Joann was preceded in death by her parents; husband Bill; sister Patricia Shuff; brother Jack Holler; sisters-in-law Phyllis Kaviuk, Patricia Hagland and Marjorie Johnson; and special friend, Russell Christensen. She is survived by her daughters Marsha (Tim) Shuff, Barb (Pat) Porter, Jana (Dan Seegert) Sullivan, Kelly (Mary) Sullivan; son Alan (Brenda) Sullivan; grandchildren Lori (Charlie) Torgerson, Geoff (Amy Basaraba) Shuff, Aaron (Kelly Kittelson) Shuff, Jennifer (Jeramy) Gauthier, Matthew Sullivan, Nathalie (Jacques Beaudoin) Bouchard, Lisa (Eric) Norstad, Jesse (Michelle) Porter) Christopher Thompson, and Samantha (Russell) Spragg; 14 great grandchildren and 2 great-great grandchildren. A private Celebration of Life will be held at a later date.

Joann Mildred Sullivan, 93, of International Falls died on Wednesday, April 7, 2021 at her home with her children by her side. Joann was born on April 16, 1927 to parents Raymond and Mae Holler in Winnipeg, Manitoba, Canada. She graduated... View Obituary & Service Information

The family of Joann Mildred Sullivan created this Life Tributes page to make it easy to share your memories.

Send flowers to the Sullivan family.