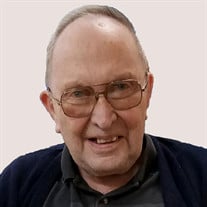 John Albert Alich, 83, of International Falls, Minnesota, died on Monday, October 7, 2019 at the Littlefork Care Center in Littlefork, MN. John was born on April 22, 1936 in Indus, MN, in Murphy Township to parents John J. and Delvina (St. Lawrence) Alich. He graduated from Indus High School, and attended Saint John’s University, and Peoria College. John and the former Jeanine Rountree were married in 1963. John was a jeweler, a Federal Serviceman with the United States Army, a United States Army Reservist, and an employee of the United States Immigration and Naturalization Service. He was a member of Saint Thomas Parish and a longtime member of the Knights of Columbus. Along with the Knights of Columbus and many other community members, John was a part of the original founding of the Life Care Center. He enjoyed spending many family weekends at “The Farm” with friends and relatives. He loved hunting, camping, playing cards, horseshoes and generally enjoying life. John was a great husband, father, and friend to many. He had a great sense of humor and he was a strong companionate man. John endured many (23) years with Alzheimer’s disease and Cancer. He fought a hard battle with complications of both in the last few weeks. He will be missed by family and friends. Our family has been truly blessed with the care received from Carefree Living in Orr, MN, the Littlefork Care Center, Fairview Hospice, and from all who supported us during this trying time. John was preceded in death by his parents; siblings, George, Pauline, Marianne, Sylvia, Agnes, twin sister Margaret; and his son, Tom. He is survived by his wife, Jeanine; sons, James and Peter; daughter, Betty Opdahl; nine grandchildren; and five great-grandchildren. Funeral services will be conducted at St. Thomas Catholic Church on Saturday, October 12, 2019 at 11:00 a.m. If so desired memorials would be preferred in John’s name to the Northern Options for Women, or the charity of your choice.

The family of John Albert Alich created this Life Tributes page to make it easy to share your memories.

Send flowers to the Alich family.