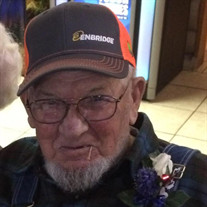 John “Jack” Garfield Kennedy, 87, of International Falls, MN died on Thursday, June 10, 2021 at his home. Jack was born in International Falls, MN on February 11, 1934 to Albert and Evelyn Kennedy. The family moved to Walhalla, ND when Jack was 9 months old. He attended school in the Walhalla area and graduated from the 8th grade. The family moved to Seattle, Washington the fall of 1950. Jack stayed through the winter but then moved back to Langdon, ND and went to work for Lawrence Wilkes hauling horses and cattle to Jamestown and W. Fargo, ND. Jack was out with friends one evening and met Joeleen Rose, who was out with her sisters. On December 28, 1953, they were united in marriage and moved to International Falls, MN. They lived in a one room house and he worked with Ronnie Nelson in the woods the first winter then went to work for Wagner/Ewald Construction. In the years that followed, they had seven children with Jack working on various projects for Wagner’s. The most notable project was the Line 2 pipeline from Neche, ND to Superior WI. From about 1966 or so to 1979, Jack was in partnership with his brother-in-law, Ronnie Nelson, operating a construction company. He then bought a truck and went to work hauling wood. He hauled for Kenny Little, Jim Jonson and various loggers in the area. In 1991, he began driving Jim Jonson’s truck hauling wood and then drove for his brother, Jim Kennedy. He finally retired the spring of 2012 after hauling wood for 55 years. In his spare time, Jack enjoyed spending time with his family, hunting, fishing and going to auctions. He was affectionately known as “Cactus Jack” by many. Jack was preceded in death by his parents Albert and Evelyn (Hell) Kennedy, son Neil, great-grandchild Gerald Milo Hasbargen, brother Harvey, parents-in-laws Joseph and Althea Rose, sisters-in-laws Sharon Rose, Sharon, Sandy, Barb, Jean Kennedy, brothers-in-laws Butch Lindvall, Ronnie Nelson, Orville Olson, Dave Halbrook and several nieces and nephews. He is survived by his wife of 67 years, Joeleen, children Mary Ellen (Joe) Dion, Kathy (Dennis) Carrier, Keith (Sally), Rita (Albert) Hasbargen, Darrell (Bonnie), and Dennis, 19 grandchildren and 30 great-grandchildren with another due in September, brothers Ray, Larry (Roseann), James (Sandy Jo), and sisters Loraine Nelson, Shirley Halbrook, Ellen Lindvall (Tom), and Iris (Harvey) Steinbach and numerous nieces and nephews. A memorial service will be held Thursday, June 17th, 2021 at 11:00 am at St. Thomas Catholic Church, International Falls, MN. Interment will follow at St. Thomas Catholic Cemetery. If so desired, in memoriam donations would be preferred to the St. Thomas Catholic Church or St. Thomas Catholic School, 810 5th Street International Falls, MN 56649 or to Fairview Range Home Care & Hospice, 2716 Crescent Drive, International Falls, MN 56649

The family of John "Jack" Garfield Kennedy created this Life Tributes page to make it easy to share your memories.

Send flowers to the Kennedy family.