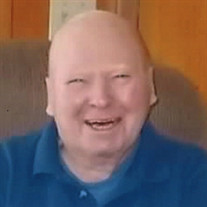 John Earl Patterson, 93, of International Falls, Minnesota, died Wednesday, August 21, 2019, at Rainy Lake Medical Center in International Falls. John was born on July 7, 1926 to John A. and Jennie (McNevin) Patterson at the Northern Minnesota Hospital in International Falls. He was raised in Devlin and Burris, Ontario communities. He was predeceased by his parents, John and Jennie; sisters, Ethel Stephenson, Eileen Martin, Myrtle Brown Miller, Darlene Grennier, Ferne Hyatt; sister-in-law, Myrna Wastell; brothers-in-law, Bill Stephenson, Charles Brown, Alex Martin, Bill Miller, John Wastell, Angus Hyatt, and Ed Grennier. John served in the U.S. Army from 1944 through 1946 with combat duty on Leyte and Luzon in the Philippine Islands and occupational duty in Japan. He was honorably discharged in 1946. He then joined the U.S. Air Force in 1950 with service in California and Newfoundland. John was honorably discharged in 1954. John worked for Mando and Boise from August 1948 to December 1984. He worked in the wood room and the storeroom and as a line supervisor in the Insulite. John E. Patterson married Helen Mary Wastell in 1955 in Fort Frances, Ontario. John and his family moved to International Falls in 1971 where he remained until his death. John was a past member of the Kiwanis Club, Humane Society, Men’s Garden Club, and the Moose Club. He was also a member of the N.R.A. and a Life Member of the V.F.W. John was also an active volunteer for KERP (Koochiching Response Program) installing many units throughout the county. As a young man john enjoyed deer hunting. With a family, his recreational time changed and he enjoyed many years of fun with his family at the cabin on Hopkins Bay, Ontario. John loved swimming, boating, reading, and relaxing. He also enjoyed walking his many dogs, hunting, dancing, and RRCC “Fit for Life” exercise. He enjoyed socializing with his many friends, the 169 Cannon Co. reunions, and winters in Gulf Shores, Alabama. John is survived by his wife, Helen; three children, Donna Richgels, Linda (Wade) Bacon, and John (Rebecca) Patterson; twelve grandchildren, Jessie (Tim) Pattrin, Katie (Nick) Simmons, Becky (Bidal) Duran, Julia and Nathan Richgels, Matt, Lillian, Kurtis, Grant, and Amanda Patterson, Dana and Brandon Bacon. He is also survived by eight great-grandchildren, Mikenna and Kaytlyn Pattrin, Avelyn and Austin Vance, Alejandra, Solvera and Peytra Duran, and Ronan Durham (Richgels). He is also survived by many nieces and nephews. John had many special dogs in his lifetime and his last chum Huck died just weeks before him. The funeral will be held at St. Thomas Catholic Church on Tuesday, August 27, 2019 at 11:00 am with interment immediately following the service at Forest Hill Cemetery. A luncheon will follow.

The family of John Earl Patterson created this Life Tributes page to make it easy to share your memories.

Send flowers to the Patterson family.