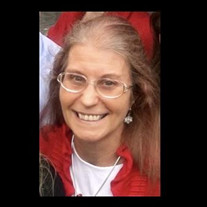 Joleen Marie Heatherly, 55, of Fayetteville, NC, passed away Saturday afternoon on November 16, 2019 at Cape Fear Valley Hospital. Joleen is survived by her husband, Charles C. Heatherly Jr., and four children, Charles III, Cye, Andrea, and Rachel Heatherly. Joleen was a longtime resident of Fayetteville, where she lived for almost thirty years with her husband and family. She was born May 21, 1964 to Dennis and Carol Vohler, at Fort Bragg military base, Fayetteville and grew up in International Falls, MN. Joleen graduated from Falls High School in 1982 and from Gustavus Adolphus College in 1986. In 1988 she married Charles Heatherly Jr. and together had four children. Joleen led an exciting life, joining the army as a lieutenant and being stationed in Germany where she had her first child, Charles III. Later she was stationed in Fort Bragg. Upon having her fourth child, Rachel, and with her husband on active duty, Joleen left military service after twelve years. Subsequently in 1999, Joleen and her family moved with Charles to live in Kuwait City, Kuwait. At the onset of the Iraq War, Joleen and the children were evacuated back to the United States in 2002. After moving back to Fayetteville in 2003, Joleen became involved in a variety of community activities as well as maintained an adventurous life, traveling around the globe from Europe to India to Japan. Described as “the glue that held people together,” she was always organizing events for family and friends. Despite her busy schedule, Joleen always placed her family first as a wonderful mother and incredibly supportive military spouse during her husband’s numerous deployments. Joleen was immensely proud of her family and will be remembered for her charitable, thoughtful nature that constantly brought her family, friends, and community together. We acknowledge and share both our joy in the gift that her life was to us, and the pain that her passing brings. She was the foundation of our family. Whether it was at graduations, family holidays, or reminding her children of birthdays, she was always thinking of others. We wish that we had more time, and perhaps that during the time we had spent together. While we know that she is at peace and that her struggles are at an end, there is pain and sadness. But even though she is gone, she has left the legacy of her love. The ways she touched our lives will remain, and we ask you to keep those memories alive. She was preceded in death by her mother, Carol Vohler. Joleen is survived by her father, Dennis Vohler; husband, Charles Heatherly Jr.; four children, Charles III, Cye (Michelle), Andrea, and Rachel; brothers, David (Tera), Dale (Rhonda), Dan (Jen), Derick; sister, Amber (Jim) Black; and numerous nieces and nephews. A memorial gathering will be at the family’s home at 2217 Westhaven Drive, Fayetteville, NC 28303, on Friday, November 29, 2019. Joleen wished to be cremated and her ashes will be taken to her childhood town of International Falls, where she will be laid to rest at her family’s lakeside cabin on Rainy Lake.

The family of Joleen Marie Heatherly created this Life Tributes page to make it easy to share your memories.

Send flowers to the Heatherly family.