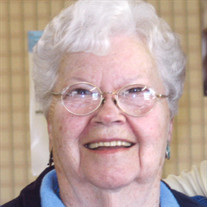 Joyce Evora Christenson, 103, of Ranier, Minnesota, died, Saturday afternoon, April 13, 2019 at Rainy Lake Medical Center in International Falls, MN. Joyce was born on July 2, 1915 in Fort Frances, Ontario, Canada to parents Henry and Maud (Colbath) Durant. In 1936 she moved to Rainer where she had lived since. She was married to Scott Couture from 1936 until his passing in 1947. Joyce was united in marriage to Gene “Speed” Christenson in 1948, in Bemidji, MN, until his passing in 1995. Joyce was a commercial fisherman and a housewife. She loved blueberry picking, camping, spending time at their cabin on Rabbit Island, and for the last thirty years she enjoyed wintering in Texas. She was a member of the Ladies V.F. W. Auxiliary, the Cooties, and the Degree of Honor. She was preceded in death by her husbands; parents; brothers, William, Dewey, Benjamin; sisters, Amber Culver, Effie Sanderson; son-in-law, Bob Case. Joyce is survived by her daughters, Diane (Lloyd) Parsons of Ranier, Pennee Case of Payson, AZ, Amber (Ken) Leerssen of International Falls; six grandchildren, Scott (Shelley) Parsons, Sarah Kielczewski (Brock Kobriger), Jacob Kielczewski, Tammy Case (Mike Timmons), Rachel Leerssen, Jenna Leerssen; two great-grandchildren, Raymond, Athena Parsons; and special friends, Gary and Judy Kielczewski. A memorial service will be held at Green-Larsen Mortuary on Friday, May 3, 2019 at 11:00 a.m. Interment will be at Forest Hill Cemetery in International Falls, MN.

The family of Joyce Evora Christenson created this Life Tributes page to make it easy to share your memories.

Send flowers to the Christenson family.