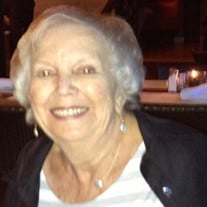 June K. Dougherty, 88, of International Falls, Minnesota, died peacefully surrounded by her loving family on Wednesday, May 19th, 2021 at Falls Good Samaritan Center. She was born on March 18th, 1933 in Ranier, Minnesota to Blanche and Charlie Williams; the oldest of six children. June graduated from Falls High School in 1951. On October 30, 1954 she married the love of her life, Bill Dougherty. Throughout their lives, June and Bill lived in Hoyt Lakes, Minnesota, Tamarac, Florida, and International Falls, Minnesota. June and Bill, alongside their family owned and operated Rainy Lake Houseboats since 1978. The resort business came naturally to her, because of the many years she spent helping her parents run Kettle Falls. She spent most of her life welcoming people to Rainy Lake. June was the original Yelp, Find my iPhone and Google Maps. If you needed a restaurant recommendation in Fort Lauderdale, Minneapolis or on Rainy Lake, June had one. She always knew where and what her children and grandchildren were up to. And while she despised driving, she was an excellent navigator right down to what lane you needed to be in, and when. June loved a good party, and was sharp, witty and a great conversationalist. If you knew her, you know that she loved the phone (and intercoms and marine band radios, too). But her fondness of the phone was rooted in the deep love she had for her family and friends. She was the heart and soul of her family. June would want you all to know, that her grandchildren have never done anything wrong, not ever, not even once. June is survived by her sons, Billy (Cathie), Charlie, and Tom (Tami); grandchildren, Rachel, Joey, Michael, Lacey, Laura, Thasa, James, Lucas, Reva, Reese, and Andy; great-grandchildren, Abby, Caitlin, Amaira, Henley, Lawson, Emma, Aidan, Rylan and Jonathan; brothers, Robbie, Mike, Chuck; sister, Peggy and numerous nieces and nephews. She was preceded in death by her parents, Blanche and Charlie Williams; husband, Bill and brother, Buck Williams. A Celebration of Life will be held at 6 PM on Monday, June 21st at Green-Larsen Mortuary Chapel, followed by a gathering with food, family and friends at Thunderbird Lodge. In memoriam donations may be made to the Falls Education Foundation or Koochiching County Hospice.

June K. Dougherty, 88, of International Falls, Minnesota, died peacefully surrounded by her loving family on Wednesday, May 19th, 2021 at Falls Good Samaritan Center. She was born on March 18th, 1933 in Ranier, Minnesota to Blanche and Charlie... View Obituary & Service Information

The family of June Karen Dougherty created this Life Tributes page to make it easy to share your memories.

Send flowers to the Dougherty family.