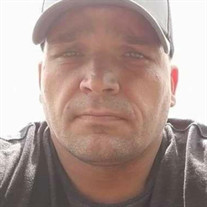 Justin Garland Earnest, age 38, passed away January 22, 2021. Justin was born on March 22, 1982, in International Falls, Minnesota to parents Ila Stish and Delbert Earnest. Justin graduated from Indus High School as the class of 2000. During his school years, Justin enjoyed his time spent playing hockey, football, and baseball. He grew to know the Herrly family over the years, and Justin affectionately called them his second family. As soon as he graduated, he began a journey with his best friend, Terrina Shoquist, who spent twenty-three years by his side. He always said that he loved her more than anything. Together, they parented three children, Hannah, RaeAnna, and Aaron. Justin was a skilled laborer. Whether it be laying brick, or shingling a house, there was not a task he could not complete. He was an avid angler, even catching an eighty-five-pound sturgeon at the age of fifteen. Justin always tried his hand at bets and enjoyed cards. He connected with music, leaving those who loved him with lyrics to remember him by. One common denominator with those who knew Justin, he could make you laugh like nobody else could with the jokes he told. Justin was an individual with a soft heart and a restless soul. He loved living life as a free spirit. Justin is proceeded in death by both maternal and paternal grandparents and uncle Kevin Lein. He will be joined with numerous aunts, uncles, and cousins. He is survived by his confidant, Terrina Shoquist, his children, Hannah (Logan), RaeAnna (William), and Aaron Earnest. His parents, Ila Stish (Doyle) and Delbert Earnest, his siblings, Zachary, Kayla, Brandon, and Nathan, and maternal grandmother Maryann Lein. He left many aunts, uncles, cousins, and friends who Justin considered family. A private funeral will be held on Friday, January 29, 2020 at 11:00 am at Green-Larsen Mortuary.

The family of Justin Garland Earnest created this Life Tributes page to make it easy to share your memories.

Send flowers to the Earnest family.