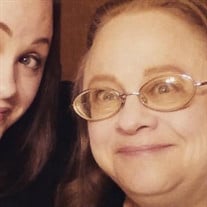 Karen Lee Larson was born to Betty Portalatin (Kendrick) and Cliff Mahar on March 2nd, 1960 in Los Angeles California. She was adopted by Richard and Doris (Phillips) Ottoson. She grew up in California until the passing of her mother when she then moved to International Falls, MN. She worked at United Health Care for many years before the birth of her daughter, Jessica. Karen loved learning. A natural history buff, she always had random trivia facts and frequented the local library where she would read everything she could. She instilled her love for books into her children and grandchildren, she would purchase entire collections for them to read. She was baptized Lutheran and was very spiritual. She was known to collect books on angels, spirituality, and had many well used bibles in her home. A California hippy at heart, she loved nature, animals, and especially the changing of seasons. She was an accomplished gardener and loved showing off her flowers, plants, produce, and herbs. She was an avid crafter and you could often find her at Smokey Bear Park and other craft shows selling her jewelry. She loved all holidays and her house was decorated wall to wall for every single one. At Christmas, she would send out as many cards as she could muster, and her eyes always lit up when she received one back Karen believed in the good in everyone and always had a plate if you were hungry, a bed if you were tired, a hug if you were down, and a home if you were a "wayward child". A big believer in gifts from the heart, she kept every card, note, drawing, and handmade gift she was ever given. To her they were more precious than gold. Her greatest joy was her grandchildren to whom she was lovingly known as Nana. She loved nothing more than to spoil them with affection, toys, and special snacks. She was endlessly proud of her children and was frequently heard bragging about their accomplishments. She would frequently "adopt" her children's friends as her own children and was known as Mom or Momma Karen to many. She is preceded in death by her birth parents, Cliff Mahar and Betty Portalatin (Kendrick); adoptive parents, Richard and Doris Ottoson (Phillips); her sister, Karen Landcaster; former mother-in-law, Grace Larson; and love of her life, Virgil Jones. She is survived by many siblings including, Jay Portalatin (Katie), Rick Portalatin (Melissa), and Lori Ottoson; along with numerous nieces and nephews. Also surviving are her children, Kristina Bragg (Jeremy), Ricky Ottoson (Amy), Jessica Larson (Paul); her "adoptive" kids, Corey Sorenson, Nova Bower, Sam Jolicouer, Megan Dueck, and Destiny Silvers-Cox; and Grandchildren, Elizabeth, Emily, Christopher, Jacob, Aaliyah, Payton, Morgan, Gage, and Addison. Her children would like to give mention to her very special friend, Kyle Paper. She will be forever missed.

Karen Lee Larson was born to Betty Portalatin (Kendrick) and Cliff Mahar on March 2nd, 1960 in Los Angeles California. She was adopted by Richard and Doris (Phillips) Ottoson. She grew up in California until the passing of her mother when she... View Obituary & Service Information

The family of Karen Lee Larson created this Life Tributes page to make it easy to share your memories.

Karen Lee Larson was born to Betty Portalatin (Kendrick) and...