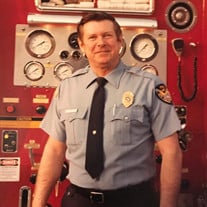 Kenneth "Buzz" William Hultman, 87, of International Falls, Minnesota, passed away peacefully on Thursday, February 6, 2020 at Rainy Lake Medical Center with family by his side. Buzz was born on August 25, 1932 to Carl and Eva Hultman in Ranier, MN. Buzz was a lifelong resident of International Falls. On June 25, 1952, Buzz married Evelyn M. Orstad and they had four children, Jim, Kathy Ellsworth, Pam Riggs, and David. Buzz joined the United States Air Force in 1950 and was stationed in Fort Bragg, NC, and Japan. In addition to the airman of the month medals Buzz received stateside, he also received the Good Conduct medal, the National Defense medal, and the Korean Presidential Unit Citation while he was overseas. He was very proud of his time in the service and told many stories of those with whom he served. He managed C & S Marine and Rainy Lake Marine, and drove school bus, but his most treasured endeavor was his 28 years with the International Falls Fire Department. Buzz was a driver/engineer for the IFFD and in 1980 was promoted to Fire Chief, a position he proudly held for 11 years until his retirement. He loved working there and made many great friends. They were his second family. He also was in charge of the International Falls Ambulance Department and was an EMT. Buzz and Evie built a cabin on Grindstone Island and we have so many great memories of island life. He loved to fish. He taught his children the art of patience and passion for fishing. We have so many wonderful memories of fishing with Dad. He loved his time at the hunting shack on County Road 8. He loved hunting with his family, and everyone being together. Family time was very important to him. Buzz also loved to go for rides in the woods with his buddies, Gene, Jim, Harvey, LeRoy and brother-in-law, David. He was a member of the Fire Chiefs Association, Elks Lodge #1599, Philosophers Club, VFW Club, and Sportsman’s Dock. He loved to cook and was especially known for his baked beans. Buzz was preceded in death by his parents, Carl and Eva Hultman; granddaughter, Jennie K. Johnson; aunt and uncle, Merrill “Red” and Pearl Rogers; mother and father in law, Henry and Bernice Orstad, brother, Robert; sister, Carol Gustafson; sister-in-law, Patricia Hultman; brothers-in-law, Darold Gustafson, Carl Tilander, Kenneth Orstad, Hank Orstad, John Rapaway, Robert Laukka. He is survived by his loving wife of 68 years, Evie, children, Jim (Marie), Kathy Ellsworth, Pam Riggs (Mike Spry), David (Christine); six grandchildren, Amy (Aaron) Mortenson, Emily (Trent) Nicholson, Bryan (Nikki) Hultman, Breanne (David) Anderson, Carl (Ariel) Hultman, Gary (Ashley) Hultman; eight great-grandchildren, Reed Hultman, Ethan Mortenson, Ellie and Kelty Nicholson, Bennett and Gannon Anderson, Braiden and Logan Hultman; two sisters, Doris Tilander, Mary (David) Jackson; brother-in-law Clifford Orstad, sisters-in-law Vivian Rapaway Demuth, Genevieve Laukka, Mary Orstad, Alicia Orstad; special cousin John "Buzz" (Kathy) Rogers, special nephew Bob Hultman, Jr, numerous nephews, nieces, cousins, and family friends, Kathleen Manka Hultman and Keith Ellsworth. His favorite song, “It’s Such a Pretty World Today” will always be a loving memory of our times together. A Celebration of Life will be held at the Elks Lodge #1599 on Friday, September 24, 2021 from !:30 to 4:00 p.m. If desired, the family would prefer memorials to Falls Elementary School, Littlefork-Big Falls School, Indus School, or the International Falls Fire Department.

Kenneth "Buzz" William Hultman, 87, of International Falls, Minnesota, passed away peacefully on Thursday, February 6, 2020 at Rainy Lake Medical Center with family by his side. Buzz was born on August 25, 1932 to Carl and Eva Hultman in Ranier,... View Obituary & Service Information

The family of Kenneth "Buzz" William Hultman created this Life Tributes page to make it easy to share your memories.

Send flowers to the Hultman family.