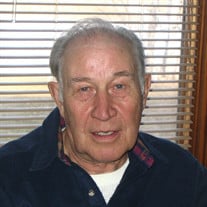 Lawrence Olafson, 86, of International Falls, Minnesota, died on Wednesday July 10, 2019 at Rainy Lake Medical Center in International Falls. He was born on October 1, 1932 in Blackduck, MN to parents Ann and Emery Olafson. Larry grew up in Blackduck and moved to International Falls in 1952. On June 23, 1956 he was married to the love of his love, the former Judith Kostiuk. They had a daughter and a son, Joey and Randy. Lawrence worked for Boise Cascade Insulite until it closed. He was named “Employee of the Month” there. He then began working in the logging industry until he started his employment at International Bildrite. Lawrence retired in 1994. Lawrence and Judy loved to travel together. They made many trips out west. Their favorite destinations were Yellowstone and Medora. He also loved to garden, snowmobile, and take casino trips. He was an avid fisherman and hunter. He never missed a year hunting with family at the family farm. Making deer drives was his favorite part of hunting. He loved moving the deer so his family could get their deer. Lawrence’s favorite spot was the family farm on Olafson Road in Blackduck. You could always find him tinkering with some piece of machinery… especially tractors. He made several elk hunting trips with Joey and Randy where they made many awesome memories. No elk, but lots of fun! He was preceded in death by his parents; wife, Judy Olafson; brothers, Eugene and Kenneth Olafson. Lawrence is survived by his daughter, Joey (Dani) Lundquist; son, Randy (Judy Jr.) Olafson; grandchildren, Angie Olek (Mike Jarvis), Mike (Brooke) Carlson, Pat Carlson, Beth (Josey) Varberg, Gina (Mike) Manahan and Dorina Lucca; great-grandchildren, Paige Leseman (Jacy Kling), Brennan Olek, Brody Carlson, Korie Valentine, Lila Carlson, Evelyn Varberg, Joseph Varberg, Christopher Varberg, Patrick Manahan and Cooper Olson, and Blake Lucca. A Celebration of Life will be conducted on Saturday, September 7, 2019 from 1 to 3:00 p.m. at the Alvwood Community Center 60373 State Highway 46, Blackduck, MN.

Lawrence Olafson, 86, of International Falls, Minnesota, died on Wednesday July 10, 2019 at Rainy Lake Medical Center in International Falls. He was born on October 1, 1932 in Blackduck, MN to parents Ann and Emery Olafson. Larry grew up in... View Obituary & Service Information

The family of Lawrence Olafson created this Life Tributes page to make it easy to share your memories.

Send flowers to the Olafson family.