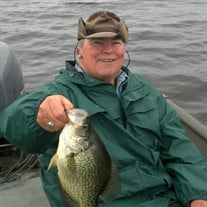 Leslie Raymond Bragg, 71, of Loman, Minnesota, died Monday, June 3, 2019, at Sanford Hospital, Fargo, N.D. Leslie was born in Littlefork, MN to parents Raymond and Constance “Connie” (Blais) Bragg on July 21, 1947. He was raised in International Falls, MN and in 2000 he and his wife moved to their hunting land in Loman where he lived until his passing. Les was a Vietnam Veteran. He was in the Navy from July 1965 to August of 1968. He was always very proud to have served our country those four years. On December 7, 1968 he met Beverly Lynn Batcher. Beverly would become his wife on January 11, 1969. Together they had three sons: Les Jr, Jerry and Jon Bragg. Les was a Turbine Engineer for Boise Cascade and was employed there for over forty years until his retirement. He enjoyed fishing on Rainy Lake, and was a fishing guide on Rainy for over twenty years. He especially loved fishing and hunting with his sons and grandchildren. Those were his most treasured moments. He also loved spending time with his wife camping in their RV while traveling around Minnesota and down to Texas in the winter. Les was a member of the Knight of Columbus for sixteen years, a caretaker at Boyscout Island, a VFW member, a volunteer at Vince Shute Wildlife Sanctuary, and a Boy Scout leader. He enjoyed being outdoors, hunting, fishing, camping, and absolutely adored his grandchildren. Les was preceded in death by his parents, Raymond and Connie Bragg. He is survived by his wife, Beverly Lynn Bragg; sons, Les (Molly) Bragg Jr., Jon Bragg, Jerry (Bonnie) Bragg; grandchildren, Jack Bragg, Connie Bragg, Grace Bragg, Travis Netland, Brittany Bragg, Josh Bragg, Joseph Bragg, Dustin Bragg; great-grandchild, Kymber Bragg; sisters, Christine (Roger) Wickstrom, Julie (Ken) Mann; and special friend, Jerry Batcher. Funeral mass will be conducted at St. Thomas Aquinas Catholic Church on Thursday, June 13, 2019 at 11:00 a.m. Visitation will be held one hour prior to service time. Interment will be at Forest Hill Cemetery.

The family of Leslie R. Bragg created this Life Tributes page to make it easy to share your memories.

Send flowers to the Bragg family.