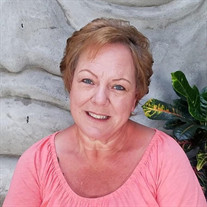 Lois Jean (Averill) Wellen was born on November 13, 1959 to LeRoy “Roy” and Grace (Halverson) Averill in International Falls, and lived here all of her life. Sadly, Lois passed away unexpected at her home on Friday, December 17, 2021 at the age of 62. Lois attended schools in International Falls and was a graduate of the Class of 1978. She married Keith Krzoska and they had a daughter, Heidi. Several years after Keith passed away, she met Donald “Don” Wellen and they married and had a son, Jesse. Lois was a daughter, granddaughter, niece, cousin, sister, aunt, wife, mother, grandmother, great-aunt, caregiver, and friend. She loved to cook large family dinners with Don in the kitchen beside her; having coffee with all her girlfriends, socializing around her fire pit with family and friends, camping, four-wheeling, traveling, and she especially enjoyed her time at the family cabin on Red Gut Bay when the kids were growing up, and at the hunting shack at Indus. Lois was very proud of her children and her five grandchildren. When she spoke of them her eyes would light up, and she always had a smile on her face. She was preceded in death by her first husband, Keith Krzoska; her maternal grandparents, Norman and Beatrice Halverson; her paternal grandparents, Ted and Eava Averill; her father, LeRoy “Roy” Averill; her sister, Susan Franko; several aunts, uncles, cousins, and her special cousin, Wayne Halverson. Lois is survived by her husband, Don Wellen; daughter, Heidi Krzoska and her children, Rebecca Drift and Brody Krzoska; son, Jesse (Shannon) Wellen and their children, Josslyn, Ivan, and Rainy; mother, Grace Averill; brother, LeRoy (Lois) Averill and their children, Crystal (David) Kunka and son, Jay; Brock (Jenna) Averill and their children, Reece and Braylee, and Lisa Averill; brother-in-law, George Franko (Shelly Connors) and his children, Laurie Franko and her children, Riley Ridgewell and Jaxson Talbert; Sarah (Tyler) Gagne and their children, Brandon, Sam, and Claire; Kelly Kittelson (Aaron Shuff) and her children, Kristen, Kalan, and Layni. A memorial service will be conducted at the Evangelical Covenant Church on Thursday, December 23, 2021 at 11:00 a.m. Interment will be at Forest Hill Cemetery in International Falls.

Lois Jean (Averill) Wellen was born on November 13, 1959 to LeRoy &#8220;Roy&#8221; and Grace (Halverson) Averill in International Falls, and lived here all of her life. Sadly, Lois passed away unexpected at her home on Friday, December 17,... View Obituary & Service Information

The family of Lois Jean (Averill) Wellen created this Life Tributes page to make it easy to share your memories.