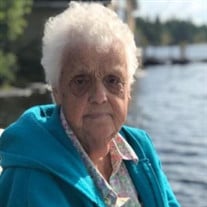 Lola Irene Ysen, 86, of International Falls, Minnesota, passed away on Tuesday, April 21st, 2020 at Rainy Lake Medical Center. Lola was born on August 30, 1933 in Hallock, MN to Kathryn (Burnell) and Melvin Erickson. She spent her younger years working at Pearson’s Bakery, Highway Curb, and the Snack Shop where she met her husband James. She was married to James Ysen on July 25, 1951 and they spent the first three years of marriage living in Shevlin, MN. Sixty eight years later their love remained as strong and admirable as ever. They spent much of their time attending church together at Faith United Church. They also spent countless hours snowmobiling, square dancing, and getting to know all of their neighbors. Lola eventually became a stay-at-home-mom taking care of her four children, making sure they were raised right. There wasn’t anybody in her family that she didn’t raise to be kindhearted. She spoke her mind and gave truthful advice to all of her loved ones, she strived to ensure everybody in her life was the best version of themselves. She was a leader for Cub Scouts and Girl Scouts for many years and still used “Scouts Honor” in every situation that she wanted to make sure those around her knew she was being truthful. She was also honored with a Laker Award from the Girl Scouts of America in 1985 for her dedication to being a troop leader. Her hobbies included camping, cooking for her family, watching Walker Texas Ranger, playing Cribbage, and fishing. Lola was very skilled at fishing, it may have had something to do with her having 3-4 lines out at a time, but she always seemed to out-fish anybody she went with. Lola loved spending time with her family including all of her children, grandchildren and great grandchildren. She spent much of her time beating them at cards, playing tricks on them, and reminding them genuinely about how proud she was of each and every one of them. If you are wondering if you have ever met Lola, chances are you haven’t. She had a spunky, sassy personality that just stuck with you. Whether it was from the stories she would tell, offering you a glass of water but making sure she put some salt in it first, or her desire to help make anybody around her laugh; there was something about her that you could never quite forget. She is survived by her loving husband of 68 years, James Ysen; her children, Susie (Brad) Mongrain, Roger (Lisa) Ysen, and Sandra Sundin; grandchildren, Angela (Dean) Duke, Patrick (Kelsey) Mongrain, Nicholas (Bonita) Ysen, Annie (Anthony) Odro, Brendon Ysen, Shelana Ysen, Benjamin (Taylar) Sundin, and Kendra Ysen; seven great-grandchildren; brother, John Erickson; and niece, Annette Schwab. She was preceded in death by her mother, Kathryn Erickson-Favors; step-father, Gus Favors; father, Melvin Erickson; son, Danny Ysen; brothers, Bobby, Delbert; sisters, Margaret, Bernice, Doris, and Harriet. Private arrangements will be made for family and friends of Lola at a later date.

The family of Lola Irene Ysen created this Life Tributes page to make it easy to share your memories.

Send flowers to the Ysen family.