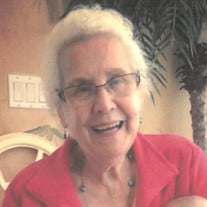 Margaret Elizabeth Thompson, 95 of Good Samaritan’s Northwinds Assisted Living Facility in International Falls, MN passed away at Rainy Lake Medical Center on January 3, 2021. She was born on May 23, 1925 in International Falls to Julius and Mary Bridgett “Nina” (Stutt) Koch. She grew up in International Falls where she resided at the Koch family’s Victoria Hotel until it was destroyed by the fire in late December of 1938, and later at the Riverside Hotel. She participated in the Falls High School band and graduated in 1943. In August 1943 she married Milton Thompson of International Falls while he was in the U.S. Army and she resided with her sister and later mother in St. Paul, MN until his discharge in October 1945 when they moved back to International Falls. Marrying into a large Norwegian family she learned to make lefse, sour cream cookies, and krumkakes with the rest of her in-laws. She was a life member of Catholic Daughters of America, enjoyed hockey, and followed her son, Jim, and the future 1962 Minnesota State High School hockey champs. Margaret and Milton would attend the Minnesota State High School Hockey Tournament until his retirement in 1983, then they would spend the winters in Florida. She continued to spend the winters there until 2015. In the 1950s Margaret, Milton and the two boys would make numerous trips to California to visit Milton’s brother, James Thompson, his wife Shirley, her uncle John Koch and his wife Edith. On her first trip she was accompanied with Milton’s parents and younger sister Janet. She was able to visit Europe twice; once on a “WWII Battle Tour” in 1979 with Milton’s company of the 78th Division and a tour throughout the Western Europe with their friends Adeline and Alan Gerlach in 1984. She enjoyed her 50 years living at her home on Rainy Lake in the Forest Point area and watching her grandchildren growing up. She was noted for her great cooking skills, especially pies, cookies and walleye sandwiches. She was preceded in death by her husband, Milton in 2002; son James in 1996; her parents Nina in 1973 and Julius in 1979; brothers, John William Koch in 1936 and Julius Jr., “Charlie Boy”, in 1991; sister Rose Marie Matthews in 2007; brothers Harry Dorholt (1986), Howard Dorholt (1975) and Herschel Dorholt (1982.) Margaret is survived by her son, Jerald in International Falls; grandsons Thor (Jennifer) Thompson and Travis Thompson of International Falls; granddaughter Terri (Trey) Poe of Anoka, Minnesota; great-grandchildren Tristan, Torin, Jaydon, Kaylan, Carter Thompson; and Linnea and Callie Poe. A special gratitude goes to her niece Kathy (Matthews) LaFrance and former daughter-in-law Trish (Sheridan) Hogan. At the decedents request there will be no formal services. Interment will be at Riverside Cemetery in Reedy Township. There will be a Celebration of Life in the summer.

The family of Margaret Elizabeth Thompson created this Life Tributes page to make it easy to share your memories.

Send flowers to the Thompson family.