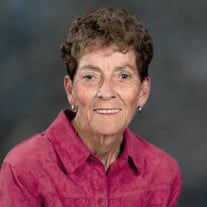 Margie Ann Larson, 88, of Littlefork, Minnesota, died on Sunday, January 31, 2021 at the Littlefork Care Center. She was born on April 29, 1932 at her aunt’s house in Cross River near Littlefork, Minnesota to Roy and Charlotte Von Alman. Her brother Bob was born in 1931 and Lyn in 1941. They lived in a one room log house until 1942 when they moved to town. The luxury was electricity and being able to walk a few blocks to see her friends rather than a mile. Margie’s parents were members of the Baptist church. She was baptized (and confirmed) in her grandmother’s church in Bathgate, ND. During most of the year they attended church in people’s homes. Along with her brother, they also attended Sunday school every week. Margie went to the Littlefork grade school in 1938. When she was 16, she met Lowell Hoven from Benson, MN, who was visiting family in town. In 1950 she graduated from Littlefork High School. On October 14, 1950, Margie married Lowell. They lived in Minneapolis where she worked for Boulevard Frocks and the Twin Cities arsenal. After returning to Littlefork, they built a house along the Littlefork river. In the years to follow, they had two daughters, Bonita and Marcy. Lowell died in 1958 of cancer. In 1961, Margie married Morrie Larson on August 26. They had one son, Lyle. They enjoyed the fishing, camping, and traveling. Morrie passed away in 1992. Margie had a love for all things old. For over 20 years, with her friend Betty Dahlen, they would dig for artifacts in old homesteads in the Littlefork and Big Falls area. Margie worked at the Littlefork-Big Falls school system from 1978 to 2014. The kids fondly called her “Large Marge”. She was also on the hospital board, ladies VFW auxiliary and member of the Littlefork Lutheran church. Margie is survived by children, Marcy (Swede) Thunstrom, Mahtomedi, MN; Lyle (Mary) Larson, Littlefork, MN; son-in-law, Kevin Hanson; four grandchildren: Shana (Jason) Wilson, Harwood, ND; Hannah (Jace) Junker, Littlefork, MN; Garrett Larson and Lauren Hovden, Thief River Falls, MN; and Breann Larson and Rylan Henrickson, Hawley, MN; and four great grandchildren: Breck and Reagan Wilson and Cass and Chesney Junker, and four sisters-in-law, Shirley (Bob) Von Alman, Dolly (Jim) Larson, Charlotte (Con) Knapek and Geil (Denny) Anderson, and many nieces and nephews. Most recently after the loss of Margie, her daughter, Bonita Hanson passed away. Margie was also preceded in death by her parents, brothers, her in-laws, both husbands Lowell and Morrie and granddaughter Tara, sister and brothers-in-law Marcella Larson, Lila (Dick) Werner, Jeanette (Ed) Rosendale, Johnny Larson, Snuffy (Betty) Larson, Jim Larson, Denny Anderson, Erica (Wally) Cates, Chuck Larson, and Jackie (Darrel) Bratten. A Celebration of Life will be held at Margie’s Home, 1216 4th Avenue, Littlefork, Minnesota on Friday, June 18, 2021 at 11:00 a.m. If so desired, in memoriam donations would be preferred to the Littlefork VFW Post #9641.

The family of Margie Ann Larson created this Life Tributes page to make it easy to share your memories.