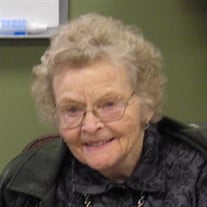 Marian Rose (Benson) Stapleton was born on October 24,1927 in Washburn, Wisconsin to Henry and Frieda (Schuller) Benson. She had two older brothers: Walter and Edward Benson, both of whom are deceased. She died on August 7, 2019 due to a stroke after years of suffering from Alzheimer’s disease. She is survived by her loving husband of 71 years, Richard Arthur Stapleton of Littlefork, MN. Among other close relatives are: their son, Russell Arthur (deceased) (Lynn), and their children; Nathaniel (Adrielle), Katie (Steven Martens) and Christopher (Ashley) their daughter, Mary Louise (John D. Wenger Jr.) of Kansas City, MO and their children: John D.III (Donna), Summer, Judah (Kyndra) and Timothy their son, Michael Jay (Tresa) of Phoenix, AZ and their children: Olivia, Michaela (Christian Gonzolez), Hannah (Peter Thompson) and James (Lacey) their son, Kenneth Lynn (Cindy) of Grand Rapids, MN and their children: Karin (Matt Smith), Erik (Rachel) and Jennifer (Luke Urbach) their son, Richard Edward (Marcy) of Hutchinson, MN and their children: Naomi (Gabriel Long), David, Luke, Joel and Anna their daughter Ruth Ellen (Kevin Pound) of Charlotte, NC and their children: Lydia, Rachel, Rebekah and Stephen. She is also survived by 19 great-grandchildren: Saffron, Jiah, Isaac, Silas, Kinsey, Jacob, Johnny, Russell, Kai, Javen, Logan, Alaina, Ava, Amelia, Adele, Noura, Eleanor, Chloe and Leah. The first two years of Marian’s life were spent in a hospital in Madison, WI due to the state requiring that her impairment of club feet be corrected. Her parents only saw her once during that time. Around 1933 Marian’s family moved to Ladysmith, WI. As a child, she led a normal life. She became a member of the Church of Christ in Ladysmith. Playing piano and riding bike with her friends were activities she enjoyed. While in High School, she worked in a canning factory for a couple of summers. In 1946, she graduated from Ladysmith High School. After graduation, Marian attended two schools: one in Minneapolis which gave a course in business machinery, and Minnesota Bible College in 1947 for a semester. Next, she went back to Ladysmith and worked in the Gambles store. While working, she helped to uncover a case of thievery perpetrated by the store’s assistant manager. On June 20,1948 she married her brother’s best friend, Richard Arthur Stapleton. They moved to Madison, WI late in 1948 so that Richard could go to the University of Wisconsin. After Richard graduated from the University of Minnesota in 1951 they eventually moved to Littlefork in the fall. Their family grew to six children and Marian thrived at mothering, homemaking and playing the organ for the Littlefork Baptist Church in town for many years. She had a strong devotion to the Lord and held numerous Bible studies in her home. She prayed consistently for her family and loved bringing people into the Kingdom of God. Hers was an open home and she had a heart for people in need. Marian struggled with Alzheimer’s disease for the last 15 years of her life but never lost her sweet, spunky spirit. Her faith continued to shine even after her mind was affected by the disease. She will be greatly missed by her husband, children, grandchildren, great-grandchildren and friends. Funeral services will be held on Saturday August 10 at Littlefork Baptist Church. Visitation at the church will be 2:00pm with the funeral service starting at 3:00. Interment is at Oakley Cemetery following the service. Refreshments will be served at Littlefork Baptist Church after the burial.

Marian Rose (Benson) Stapleton was born on October 24,1927 in Washburn, Wisconsin to Henry and Frieda (Schuller) Benson. She had two older brothers: Walter and Edward Benson, both of whom are deceased. She died on August 7, 2019 due to a stroke... View Obituary & Service Information

The family of Marian Rose Stapleton created this Life Tributes page to make it easy to share your memories.

Send flowers to the Stapleton family.