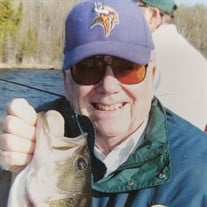 Marvin Robert Pearson, age 89, of Bemidji, MN and formerly International Falls, MN went to the arms of Jesus on Friday, February 15, 2019 at Sanford Health WoodsEdge in Bemidji. Marvin was born February 26, 1929 in International Falls, MN, to Oscar and Marion (Hafdahl) Pearson. He graduated from International Falls High School, and on February 24, 1951, married his high school sweetheart, Marylou Miljonovich. They had two sons, Scott and Rick. Marvin served two years in the US Army Signal Corps, stationed at Fort Monmouth in New Jersey, where he worked on information and radio communication systems operations. He then attended Dunwoody Institute in Minneapolis, in the special bakery division, graduating at the top of his class. He took his baking skills back to the Falls where he worked as head baker for the family business, Pearson’s Bakery. He especially enjoyed baking bread and delivering it to local restaurants and resorts. During this time, he was also an active scout leader and served as president of First Lutheran Church. Upon his retirement from the bakery, he worked as an appliance salesman for Sears. He managed the night shift at the Holiday Inn, drove for Green-Larsen Mortuary, shuttled cars for Wherley and Sheridan Motors, and was part-time fishing guide for Rusty Myers Flying Services and Vernon Jones’ Rainy Lake Airways in Fort Francis, Ontario. Marvin had a great sense of humor and an unending supply of “Ole and Lena” jokes. His hobbies included fishing, hunting, electronics, computers, and radios. Having grown up in the coldest spot in the nation, it was appropriate that his CB radio operator handle was “Sub Zero”. His favorite pastime, however, was fishing for walleye and smallmouth bass in Rainy Lake and the Rainy River with his sons, Scott and Rick. International Falls was Marvin’s home for 87 years until he moved, with Marylou, to an assisted living apartment in Bemidji to be near his children. He is survived by his wife of 67 years, Marylou Pearson of Bemidji; 2 sons, Scott (Kate) Pearson of Bemidji and Richard Pearson of Chaska, MN; sister, Marlys; and 2 brothers, Donald and Doug. He was preceded in death by his parents Oscar and Marion Pearson; his beloved dog Pepper; and numerous aunts and uncles. Funeral services will be held at 2:00 p.m., Friday, February 22, 2019 at First Lutheran Church in International Falls with visitation one hour prior to the service at the church. Pastor Erin Coutts will officiate. Inurnment will take place at Forest Hill Cemetery. Marvin’s care has been entrusted to Green-Larsen Mortuary of International Falls. Memorials to First Lutheran Church of Int’l Falls for their sound system, or to the Int’l Falls Public Library for the purchase of books are preferred.

The family of Marvin Robert Pearson created this Life Tributes page to make it easy to share your memories.

Send flowers to the Pearson family.