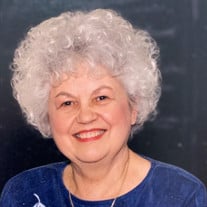 Mary Louise (Miljonovich) Pearson, 90, of Bemidji, MN and formerly Int’l Falls, MN, passed away on Monday, October 4, 2021 at the Bemidji Sanford Hospital with her son, Scott, and daughter-in-law, Kate, by her side. Mary Lou was born July 15, 1931 in Chicago, Illinois to Louis and Mary (Shuster) Miljonovich. She later lived in Duluth, Chisholm, and Int’l Falls, MN. Mary Lou graduated from Int’l Falls High School, and on February 24,1951, married her high school sweetheart, Marvin Pearson. They had two sons, Scott and Rick. During high school, and until she was married, Mary Lou waitressed at Pearson’s Bakery. Shortly after their wedding, she and Marvin moved to New Jersey where they were stationed at Fort Monmouth military base. Two years later, they returned to Int’l Falls to help run the family-owned bakery. After 20 years in the bakery, Mary Lou hung up her apron and became a teacher. She drove 200 miles round trip from Int’l Falls to Bemidji and back daily for two years to attain her teaching degree at Bemidji State University. She began her 28-year career in Loman, MN, but was soon hired in Int’l Falls where she taught at Falls Elementary, Backus Middle School, the Falls High School, and Rainy River Community College. In 1975 Mary Lou received the Bush Fellowship Leadership Award, and in 1996, was honored as one of the top ten finalists for the Minnesota Teacher-of-the-Year Program. She thoroughly enjoyed teaching Government; Economics; Geography; and American, European, WWII, Reformation, Renaissance, and Rainy Lake History. Her love of history led her to serve as a part-time historian for Voyageurs National Park where she assisted in assembling the museum, conducted over 90 oral history interviews, gave tours, represented the park at congressional hearings, and published numerous articles. Mary Lou was a scout den mother, a member of Beta Sigma Phi - Alpha Upsilon Chapter, and an active member of First Lutheran Church. She was the director of the Koochiching County Historical Society and Community Education. She served as President of the Friends of the Library Board, the Hospital Auxiliary, and the League of Women Voters. Her list of community involvements is long, and her awards, many. She loved spending time with her Birthday Club friends and her colleagues in the Int’l Falls’ Renaissance Club, an organization that provided used books for children and whose goal was to promote quality education. Mary Lou was a loving mother with a fierce devotion to family; and a kind, intelligent, stylish, and elegant woman, with impeccable leadership abilities which she used for the benefit of her entire community. She enjoyed reading, writing, traveling, watching the news, walking her dog, and spending time with her children. Int’l Falls was Mary Lou’s home for 74 years until she moved, with her husband, to an assisted living apartment in Bemidji to be near her children. Mary Lou is survived by two sons, R. Scott (Kate) Pearson of Bemidji, and Richard Pearson of Chaska, MN; half-sister Sherry Faith. She was preceded in death by her husband, Marvin (2019); parents, Louis and Mary; brothers, Dick and Fred; and her beloved dog, Pepper. Funeral services will be held at 10:30 a.m., Wednesday, October 20, 2021 at First Lutheran Church in International Falls with visitation one hour prior to the service at the church. Pastor Andy Berry and Arch Deacon Lee Grim will officiate. Interment will take place at Calvary Cemetery in Chisholm, MN that same day. Mary Lou’s care has been entrusted to Green-Larsen Mortuary of International Falls. Memorials to Voyageurs National Park or to the Int’l Falls Public Library for the purchase of books are preferred.

Mary Louise (Miljonovich) Pearson, 90, of Bemidji, MN and formerly Int&#8217;l Falls, MN, passed away on Monday, October 4, 2021 at the Bemidji Sanford Hospital with her son, Scott, and daughter-in-law, Kate, by her side. Mary Lou was born... View Obituary & Service Information

The family of Mary Louise Pearson created this Life Tributes page to make it easy to share your memories.

Send flowers to the Pearson family.