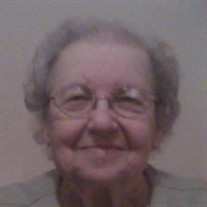 Mary M. Prettyman, 97, of International Falls, Minnesota, died peacefully surrounded by her loving family on Saturday, May 1, 2021 at Rainy Lake Medical Center. She was born on February 1, 1924 at Int’l Falls to Fred and Julia Shewchuk; she was the child of immigrant parents. She lived in the Prettyman house for over 60 years on the corner of 5th Street. Mary learned English and taught her parents. Mary graduated from Falls High School with the Class of 1941. Mary’s Catholic faith was very important to her throughout life; she was a member of St. Thomas Catholic Church where she was baptized, received first communion, confirmed and later united in marriage to James Prettyman. For many years, Mary worked as a retail clerk at Riley’s Sporting Goods Store. Her hobbies included fishing, league bowling, her love of yardwork and supporting her children and grand-children’s involvement in sports; she also loved to follow her beloved Minnesota Twins and Timberwolves. Mary was also a lifelong member of the VFW auxiliary. Mary left a legacy of teachers including two of her children and four of her grandchildren. She was the strong-willed Matriarch of our family which she passed on to the generations that followed. She was preceded in death by her parents, Fred and Julia (Segan) Shewchuk; husband, James “Bud” and daughter-in-law, Beth Prettyman. Survivors include sons, Joseph James Prettyman and John Jay Prettyman; daughters, Julie (Delbert) Bernard and Jean (Wayne) Sullivan; brother, John Shewchuk of South St. Paul; grandchildren, Robert (Amy) Tersteeg, Jennifer (Jay) Butterfield, Katie (Ross) Hamers, Amy (Ryan) Eilerts and Jim, Anne and John Sullivan; great-grandchildren, Nikolai, Olivia, Kaylie, Harry, Emma, John, Bennett, Lydia, Hayes, Braiden, Alyssa and Mila. Also survived by numerous nieces and nephews The Funeral Mass of the Resurrection will be held on Friday, May 7, at 11:00 am at St. Thomas Catholic Church. A visitation will be conducted one hour prior to the funeral with the Recitation of the Holy Rosary to begin at 10:15 am. Interment will at St. Thomas Catholic Cemetery. If so desired, in memoriam donations would be preferred to the Purple Pride & Falls Education Foundation, P.O. Box 933, International Falls, MN 56649

Mary M. Prettyman, 97, of International Falls, Minnesota, died peacefully surrounded by her loving family on Saturday, May 1, 2021 at Rainy Lake Medical Center. She was born on February 1, 1924 at Int&#8217;l Falls to Fred and Julia Shewchuk;... View Obituary & Service Information

The family of Mary M. Prettyman created this Life Tributes page to make it easy to share your memories.

Send flowers to the Prettyman family.