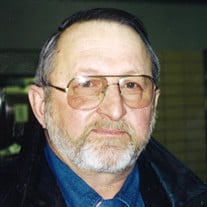 Michael William "Mick" Kuryla Jr., 77, of International Falls, Minnesota died on Monday, May 13, 2019 at Carefree Living in Orr, Minnesota with family by his side. He was born on January 31, 1942 in International Falls, Minnesota to Mike and Helen (Coran) Kuryla. Mick grew up in International Falls and graduated from Falls High School in 1960. Mick served in the Army and later in the Army Reserves. He was honorably discharged in 1970. On November 28, 1964, Mick married Iverne Borg and they had two daughters, Melissa (Missy) and Heather. Later on he was blessed with two grandsons, Jordan and Brady Walls. Mick love, love, loved to hunt! He hunted almost any animal. He loved to build things and built their beautiful home and garages mostly on his own. Mick worked at Boise Cascade and then MA Mortenson until he retired in 1997. Mick was preceded in death by his parents, Mike and Helen (Coran) Kuryla and his brother, John (Butch) Kuryla. He is survived by his wife, Iverne Kuryla; daughters, Missy Walls and Heather Kuryla; two grandsons, Jordan (Kelsey) Walls and Brady Walls; brothers, Jim Kuryla, Tom (Peggy) Kuryla, Jerry Kuryla and Paul Kuryla; sisters, Chris Anne (Joe) Polus and Margaret (Wayne) Holmestad; sister-in-law, Linda Kuryla and numerous nieces and nephews. A special thanks to Carefree Living Staff in Orr, Minnesota for their great care. Funeral mass will be held at St. Thomas Catholic Church on Thursday May 16, 2019 at 11:00 a.m. Visitation will begin one hour prior.

The family of Michael William "Mick" Kuryla Jr. created this Life Tributes page to make it easy to share your memories.

Send flowers to the Kuryla family.