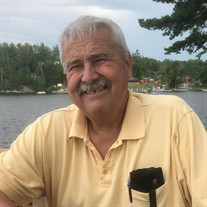 Michael Wilfred Zahn Sr., age 69, of International Falls, Minnesota, died on Tuesday, June 4, 2020 at Rainy Lake Medical Center in International Falls. Michael was born on April 9, 1951 at Madison, Minnesota to parents, Clarence and Leona Zahn. In 1957, he moved with his family to Int’l Falls, MN. He graduated from Falls High School in 1969. He was united in marriage to the former Teresa Locey on February 14, 1981 in Int’l Falls, MN. Michael loved to do anything outdoors. He coached various sports; he loved his Vikings and Minnesota Twins but most knew him from the bowling leagues. He loved dancing with Teresa to Patty O’ Porter on Sundays or any chance he got. He loved kids and was always the first one to interact with them. He enjoyed Wednesday night Kinect bowling at the Junction with friends. He also spent time on the pontoon boat and enjoyed going to his brothers and sitting at the lake, playing cribbage and road trips t. If you couldn’t find Michael, he was hiding in his office playing solitaire on the computer. He was preceded in death by his parents, Clarence and Leona Zahn; brothers, Bobby Zahn and Chuck Zahn; daughter, Jennifer Nelson; and grandson, Quinton Campbell. Michael is survived by his wife, Terri; sons, Michael Zahn Jr., Jeffrey (Carmen) Zahn; daughters, Jessica (Nick) Zahn, Nikki (Peter) McCourt and Dana (Wayne) Gaudreau; twelve grandchildren, Brittany, Arial, Abbelina, Armando, Layla, Lauren, Zachary, Danika, Kelsey, Clare, Mia and Roman; two great-grandchildren, Link and Serenity; sisters, Cathy Nugent and Bev Long; brother, Eldon (Linda) Zahn as well as numerous nieces and nephews. A private memorial service will be held at The Gateway Assembly Church.

The family of Michael Wilfred Zahn Sr. created this Life Tributes page to make it easy to share your memories.

Send flowers to the Zahn family.