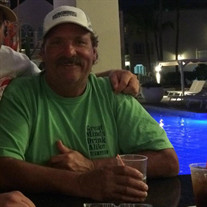 Milton “Mike” Kochaniuk passed away unexpectedly at his home in Ericsburg, Minnesota on August 19, 2021. He spent his final day out with one of his good friends from Texas, having drinks and telling stories. Mike was born to Milton Kochaniuk and Sally Kochaniuk (Hansen) on April 24, 1957. He was the oldest of four brothers and loved his brothers dearly. He graduated from Falls High School in 1975. He was accepted into the Air Force Academy that same year and graduated in 1979 with a rank as first lieutenant and flew a KC-135 Air Refueler which he flew all over the world and was known for his famous fly-overs over Rainy Lake. Mike’s love of flying began prior to that working at a fishing lodge in Chantrey Inlet in Nunavet Province, Canada in the Artic Circle. Following his service in the United States Air Force, he began his career with the Koochiching County Highway Department. Mike then met Mattielu Pearson and they were joined in marriage on October 9th, 1987. On June 19, 1988 on Father’s Day, their daughter Nikki Everette Kochaniuk was born. They later divorced and in time he was reunited with his high school sweetheart, Patricia Jackson and her daughter, Britt Jackson (Lundquist) whom he took in as his own. Mike and Patti were together for 31 years. Mike had a love for many things including flying in his early years. He even had his own plane. He enjoyed the most spending time at his family cabin on Warner Lake in Canada for 60 plus years, at his family timeshare in Aruba, and at his property on the Big Fork River. Mike was an amazing cook and had many old family recipes that he passed on to his daughter, Nikki. He also enjoyed hunting, fishing, snowmobiling, playing cribbage, bonfires, late night saunas at the cabin, stargazing, northern lights, comradery of close friends and family, always wanting everyone to have a good time, and especially spending time with his grandkids, Reed Milton (Woodtick) and Katlyn Leanne (KK) and Afton Elizabeth (Affy). There are many ways to describe Mike. Behind his wild blue eyes, he was brilliant, kind, loving, caring, well respected, willing to give the shirt off his back to anyone in need, brutally honest, wild, and was considered a hero to many people, most importantly, his grandchildren. He was given a few nicknames over the years, some that are commonly known are Coconut, Uncle Milty, Soot, and by his grandchildren and family, “Umpa.” He had many wild stories and they all were true. His smile and laugh were contagious and gave the best hard hugs. He had many cherished lifelong friends. Mike was preceded in death by his parents, Milton and Sally Kochaniuk; stepfather, Jim Laurent; brothers, William “Bill” and Nikolas “Nick” Kochaniuk. He is survived by his brother, Andrew “Andy” Kochaniuk; his love, Patti Jackson; daughter, Nikki (Bryan) Hultman; other daughter, Britt Jackson (Borje) Lundquist; grandchildren, Reed Hultman, Katlyn Lundquist, and Afton Lundquist; stepbrother, Harris (Connie) Laurent, Doug (Kathy) Laurent; stepsister, Mary Kay (Dan) Alleman, and their families. As well as many other important relatives. The world of the friends and family of Milton will never be the same. A Celebration of Life for Mike will be held on Thursday September 2, 2021 at the VFW Club in International Falls, MN from 3 pm -7 pm.

Milton &#8220;Mike&#8221; Kochaniuk passed away unexpectedly at his home in Ericsburg, Minnesota on August 19, 2021. He spent his final day out with one of his good friends from Texas, having drinks and telling stories. Mike was born to Milton... View Obituary & Service Information

The family of Milton "Coconut" Michael Kochaniuk created this Life Tributes page to make it easy to share your memories.

Milton “Mike” Kochaniuk passed away unexpectedly at his home...

Send flowers to the Kochaniuk family.