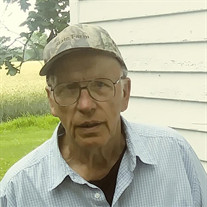 Norman Obert Lee passed away December 30th 2019 surrounded by his loving family. Ross, Minnesota, the 5th child of 7 children born to William A. Lee and Randi K. Lee, both descendants from Norway. Norman, along with his brothers, started working on the family farm at a very young age. At 12 years old, he walked 2 miles to build a fire in the country school house before the teacher and other children would arrive. When age 16, he traveled to North Dakota and picked potatoes. Norman enjoyed playing hockey with friends and his brothers at Ross rink, being very proud of his wrist shot. He trapped and hunted at an early age. In 1951, Norman graduated from Roseau High School. He and his brothers were all drafted and in February 25th, 1952 he joined the USAF becoming an Air Policeman. While serving, Norman was awarded a Good Conduct and National Defense Service Medal. His overseas duty was 19 months in Okinawa, Japan and he received his honorable discharge in Duluth MN. When returning to Ross it was at a neighbor's house he met Carol Reichelt, later marrying the love of his life. Together they had 3 children, DeAnna, Stuart and Tony. Norman worked at Boise Cascade for 26 years until the 1984 shutdown. Then he worked for Voyageurs National Park, Bildrite and Green View Travel Center until his retirement. His hobbies were snowmobiling, ice fishing, hunting, maintaining his bird houses, and his garage time with his barrel stove fire. Being a jack-of-all-trades enabled him to do all car and home repairs. Health/Fitness was important, walking biking and doing "military push-ups" until his mid-80's allowed Norman to eat "whatever" he wanted. His favorite foods were his mother's mashed potatoes and famous Norwegian homemade meatballs/ gravy, Lutefisk, and Lefse. He was preceded in death by his father; mother; brothers, Albert Lee, Clarence Lee; and sister-law, Nellie Lee. Norman is survived by his loving wife, Carol; 3 children; grandson, Mathew Patterson; brothers, Lawrence Lee, Gilmore Lee, Kenneth (Kay) Lee; sister, Lillian (Rol) Hellquist; sister-in-law, Gloria Lee, Vivian Lee; numerous nieces, nephews and extended family. The years have gone fast and our story has ended but the journey I would do over and I think you would agree, IT WAS MEAN'T TO BE! Per Norman's wishes, a private graveside service will be held.

Norman Obert Lee passed away December 30th 2019 surrounded by his loving family. Ross, Minnesota, the 5th child of 7 children born to William A. Lee and Randi K. Lee, both descendants from Norway. Norman, along with his brothers, started working... View Obituary & Service Information

The family of Norman O. Lee created this Life Tributes page to make it easy to share your memories.

Send flowers to the Lee family.