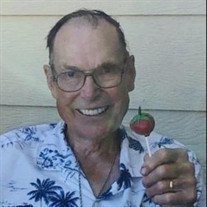 It is with mixed emotions of sadness and joy that we announce the commendation of the spirit of Orin Lee Simon unto the Lord, as he takes his place with the heavenly angels. Born June 26, 1940 in Ashland, Wisconsin to Joseph N. Simon and Angeline C. (Payette) Simon. Since his 80th birthday, Orin has given it his all with his family constantly by his side, but in spite of the superb work of the medical teams, life was not to be. His earthly journey ended September 23, 2020. He is preceded in death by his parents and his sister, Janet. He is survived by his brother, Vern (Mavis); his wife of 57 years, Bethany (Bette Miller) Simon, three children, David (Lisa) Simon, Jeanne (Steve) Bolstad, and Joel Simon; five nieces, Mary (Eric), Kathy, Susan, Sharon (Gene) and Patty (Ken); seven grandchildren, Andrea (Jake), Keith, Cody, Joshua, Claire (Zachary), Alexander and Zachariah; and three great grandchildren, William, Annalynn and Noelle. He developed a strong work ethic being raised on a dairy farm in Saxon, Wisconsin; and developed a love of sports playing basketball at Saxon High School. He entered basic training at Ft. Leonard Wood for the Army National Guard right out of high school and spent a year on active duty at Ft. Lewis, Washington. After being honorably discharged from serving his country, he got his bachelor’s degree from Wisconsin State at Superior and his master’s degree from Bemidji State University. He said he had the “best job in the whole school district” and had numerous “favorite students” while teaching high school math (mostly geometry and trigonometry) for 33 years at Falls High School; and as a substitute teacher (known as “The Candy Man”) for many more years. For 40+ years, he was the voice of Bronco basketball, wrestling and several other sports as the public address announcer. He was especially proud to have been the announcer for the first girls’ basketball game. Orin was an active member of St. Thomas Catholic Church and was a 4th Degree member of the Knights of Columbus. He served as a Grand Knight, a District Deputy of the international district, and as a Faithful Navigator; and he was elected to the Minnesota Knights of Columbus Hall of Fame in 2006. A passionate advocate for the unborn, Orin expressed his love for life by helping to start the Northern Life Care Center (Northern Options for Women) and proudly serving on the board of directors for many years. He was a member of the local garden club; and around town he was also known as “The Tomato Man” for giving away the extra tomato plants he started every year for his marvelous gardens. He was very clear that he was not a “master gardener”, but referred to himself as a “pretty good gardener”. He enjoyed camping, fishing, hunting, and making maple syrup (at Beaver Brook Hunting Lodge) with family and friends. Please remember Orin with a gift to your favorite charity or to one of his favorite charities mentioned above. A private funeral will be held. A livestream of the funeral will be made available via the Green-Larsen Mortuary facebook site on Friday, Oct. 2, 2020 at 11 a.m. Interment will be at Forest Hill Cemetery.

It is with mixed emotions of sadness and joy that we announce the commendation of the spirit of Orin Lee Simon unto the Lord, as he takes his place with the heavenly angels. Born June 26, 1940 in Ashland, Wisconsin to Joseph N. Simon and Angeline... View Obituary & Service Information

The family of Orin Lee Simon created this Life Tributes page to make it easy to share your memories.

It is with mixed emotions of sadness and joy that we announce...

Send flowers to the Simon family.