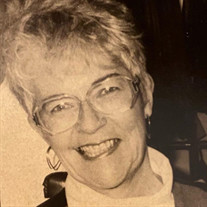 Pamela Dell Mason, 83, of International Falls, Minnesota, died on Monday, March 22, 2021, at the Good Samaritan Society-International Falls. She was born April 9, 1937 in International Falls, to Harold and Lucille Morse. Pam graduated from Falls High School in 1955. She married the love of her life, Donald Mason, from Fort Frances, Ontario, on June 20, 1957. Pam and Don were known for their across the border love affair. He was a popular Canadian athlete and she was an American cheerleader and homecoming queen. Don and Pam moved to Dryden, Ontario, shortly after their marriage, where their first child, Nancy, was born. They moved back to International Falls in 1960 where Don began his retail career under Pam’s father, Harold Morse. Besides being a homemaker and a busy mom to four, including twins, Pam became an expert salesperson along side her husband at their clothing stores, Harold’s for Him and Her, and Mason’s Men’s Shop. She was also employed as a switchboard operator at Mando in her younger days. Pam was a member of the Mrs. Jaycees Club, Job’s Daughters organization, Faith United Church of Christ, and their church choir. Pam was the ultimate hockey mom to her three sons, Bob, Bill, and Jim, following them through many years of hockey games, from Pee Wee to the NHL. She could always be heard cheering them on - loud and proud. Pam endured a lengthy battle with MS. Although the disease eventually robbed her of much of her movement and energy, she maintained her spunky personality and bright smile throughout these difficult years. In 2004, Pam entered Good Samaritan Society and it became her new home, where she was cared for lovingly and became a favorite resident among staff. Family visited often, always admiring her positive attitude and never witnessing sadness or anger. She coped with her disease with much strength and grace. She was preceded in death by her parents, Harold and Lucille Morse; husband, Donald Mason; brother, Tom Morse; and daughter-in-law, Victoria Mason. She is survived by her sons, Bob Mason of Bloomington, MN, Bill (Shawn) Mason of International Falls, James (Stephanie) Mason of International Falls; daughter, Nancy (Michael) Imhof of Littlefork, MN; seven grandchildren, Lindsey (Ryan) Sullivan, Mason (Veronica) Imhof, Aleisha, Myles, and Josie Mason, Tyler and Kyle Toratti; three great-grandchildren; brother, Robert (Ancy) Morse of Rochester, MN; sisters, Patricia (Mark) Bryning of San Diego, CA., and Mary (Pat) Hogan of International Falls. A small funeral service will be held at Green-Larsen Mortuary on Thursday, March 25, 2021 at 1:00 p.m. Visitation will begin one hour prior. If so desired, donations in Pam’s memory would be preferred to the Good Samaritan Society - International Falls, 2201 Keenan Dr, International Falls, MN 56649, or to the Falls Education Foundation, PO Box 933, International Falls, MN 56649 / [email protected]

The family of Pamela Dell Mason created this Life Tributes page to make it easy to share your memories.

Send flowers to the Mason family.