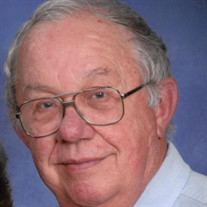 Ralph William Carl Awe, 80, of International Falls, Minnesota, passed away on Monday, July 19, 2021 at Good Samaritan Society in International Falls. Ralph was born April 3, 1941 to William and Alvina (Tessmer) Awe in Graceville, Minnesota. The family lived in Beardsley, Browerville, Long Prairie and Pillager, Minnesota, where Ralph graduated from PIllager High School in 1959. It was at Pillager High School where he met his wife, Kathy. Ralph and Kathy were married on September 9, 1961 at First Lutheran Church in Pillager, while he was attending Bemidji State University, where he graduated in 1963. Ralph taught math for 36 years in Hill City, Pillager, and International Falls, where the family moved to in the summer of 1970. The family also spent one year living in Ashwood, Australia while Ralph taught math at Berwick High School in Berwick, Australia on a teacher exchange program. Ralph also was a principal while teaching at Pillager and coached at Hill City, Berwick and International Falls. Ralph’s favorite things to do were spending time with family and friends, going fishing and hunting, playing cards, going boating and pontooning with family and friends, and doing crossword puzzles or putting together puzzles. He played many hours of bridge and poker with friends from both Fort Frances, Ontario and International Falls. There wasn’t a card game or board game Ralph didn’t like. Ralph and Kathy lived on Rainy Lake the last 34 years. He always had his bird book and binoculars by the window to check out the different birds or see where people were fishing. Ralph and Kathy made many of their grandchildren’s events, including concerts and games, and were actively involved in their lives. Ralph was preceded in death by his parents, William and Alvina Awe; wife, Kathryn (Kathy); son, Kenneth (Ken); sisters, June Thorson and Beverly Kleinschmidt; brother-in-laws, Norman Thorson and Hubert Kleinschmidt; sister-in-law Lynn Scearcy; and father and mother-in-law George and Sylvia Scearcy. Ralph is survived by son Wiliam (Lori) of International Falls, grandchildren Devin Awe, of Shorewood, MN; Paige (Matt) Boorman, of Proctor, MN; and Tony (Emilie) Zubriski, of Carpio, ND; and great-grandchildren Ethan and Lily Boorman. Ralph is also survived by brother-in-laws Lowell (Diane) Scearcy, of Brainerd, MN; Jim Scearcy, of Minnetonka, MN; and Lanny (Karen) Scearcy, of Brainerd, MN, in addition to former daughter-in-law Rachel Holmquist and numerous nieces and nephews. The family would like to thank all the local health care professionals at Rainy Lake Medical Center who took care of Ralph, especially Betsy Loop. The family would like to also thank the local health care professionals at Good Samaritan Society, especially Jessica Boorman and Macy Skrien. The family would also like to thank those special friends that drove Ralph to his radiation sessions in Hibbing and his chemo sessions in International Falls or just spent time with him. A visitation will be held for Ralph and Kathy on Wednesday, August 25, 2021 from 5 pm-7pm at Green-Larsen Mortuary in International Falls.Sharing of stories and remembrances about Ralph and Kathy will begin about 6 p.m. The funeral for both Ralph and Kathy is at on Thursday, August 26th, 2021 at 1 pm at First Lutheran Church in International Falls. Interment will be at 1 p.m. on Friday, August 27th at Wildwood Cemetery in Pillager, Minnesota. If so desired, in memoriam donations would be preferred to First Lutheran Church or the Good Samaritan Society in Ralph's memory.

The family of Ralph William Carl Awe created this Life Tributes page to make it easy to share your memories.

Send flowers to the Awe family.