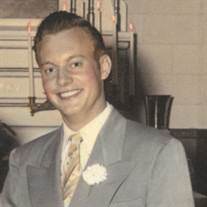 God looked around his garden And found an empty place He then looked down upon Earth And saw your tired face He put his arms around you And lifted you to rest With the help of his angels they Flew you to your heavenly place Raymond Ingvald Gorder, 91, died peacefully, at home, on December 15, 2020. Ray was born on July 11, 1929, on a farm near Park River, North Dakota. Ray attended various local schools in Park River and then, at age 14, moved to Flint, Michigan to be with his father. While in Flint, he worked with his Dad in the building industry. At the age of 18, Ray had a serious accident that landed him in the hospital for months. Upon discharge, he moved back to North Dakota where he met his future wife, Erlene. They moved to International Falls and were married July 29, 1950, at Zion Lutheran Church. They were married for 70 years. Above all else, Ray was a Christian. He was confirmed in 1952 and became a life-long member of St. Paul’s Lutheran Church. He was a part of the Men’s Breakfast Club. He had his “dedicated pew,” on the left side of the sanctuary, in the row next to the electrical outlet that was located on the aisle. Ray worked for the Mando Paper Company, later known as Boise Cascade, for 41 years. He was appointed to the Arrowhead Regional Corrections Advisory Board, in 1993 and remained a member for 23 years. He was recognized for his work by then Commissioner Rick Goutermont, commending Ray for never having missed a meeting during the entire time he served. In his prime, Ray loved the outdoors—hunting, fishing and snowmobiling. He knew Rainy Lake like the back of his hand! More recently, Ray enjoyed auctions, his computer, watching westerns on television and listening to country music. He loved animals and never met a dog he didn’t like or that didn’t like him. One of the most important lessons Ray taught his children was to respect everyone and treat others like you would like to be treated. Ray had a wonderful sense of humor and could keep us laughing for hours reminiscing about his past adventures. He had an uncanny memory for people and places. He loved clothes and Lincoln Continentals. Ray loved his family unconditionally. His best times were spent with his loved ones. In addition to his parents and grandparents, Ray was preceded in death by his infant son, Lance; sister, Adeline Haglund; and brother, Duane Gorder. He will be deeply missed by his wife, Erlene; brother, Darl Gorder (Linda); children, RaNae Whitbeck (Brad), Shelley Turner (Tom), Cindy Story (Monty), Rocky Gorder (Sue); grandchildren, Brandy Erholtz (Matt), Sara Lowinski (Correy), Carly Toder, Lance, Laura (Dustin) and Samantha Gorder, Ryan (Paige) Turner; great-grandchildren, Bryson Gorder, Asher and Zeke Erholtz, Lexi Lowinski and many other family members and friends. A private funeral will be held on Tuesday, December 22, 2020 at 11:00 am at St. Paul’s Lutheran Church with Pastor Jacob Quast officiating. Interment will be at Forest Hill Cemetery.

God looked around his garden And found an empty place He then looked down upon Earth And saw your tired face He put his arms around you And lifted you to rest With the help of his angels they Flew you to your heavenly place Raymond Ingvald... View Obituary & Service Information

The family of Raymond I. Gorder created this Life Tributes page to make it easy to share your memories.

God looked around his garden
And found an empty place
He then...

Send flowers to the Gorder family.