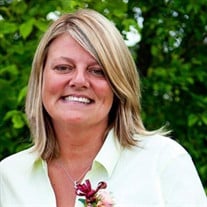 Becky Fisher (Buc Buc), 50, of International Falls, Minnesota, died on Thursday, December 24th, 2020 at her home in International Falls, Minnesota. She was born January 12th, 1970 in International Falls, Minnesota to Sandy Bruce. Sandy moved to Littlefork with her children Jeffrey and Rebecca in 1973. Becky was raised in Littlefork, Minnesota. She also spent much of her time with Nanny and Grandpa in International Falls, Minnesota. She graduated from Littlefork-Big Falls High School in 1988. After graduating, Becky worked several different jobs. She was a bartender at several different establishments. In 1995, she moved to Las Vegas where she bartended at Rockabillies and attended school to become a travel agent. August 4th, 1997, Ryan Michael Tremain made her a mother. We remember the day he was born and how happy she was. Becky was employed at the Thunderbird Lodge for 14 years as a bartender and a manager. She made many friends over the years while she worked there. She kept in contact with many of the customers she met over the years after she moved on from the Thunderbird. She married Tim Fisher December 27th, 2005, at The Little White Chapel in Las Vegas, Nevada while they were surrounded by some of their favorite people. She gained three-step children when she married Tim. Becky was a home daycare provider for several years. She cared for many children throughout the years. Becky had a way with children, and they all loved Grandma Becky. Becky was welcomed at the Gates of Heaven by many people she has been grieving for. Awaiting her were grandparents, Allan and Lorraine Bruce; niece, Alicia (Heem) Larsen; aunt, Lyn Bruce; grandma, Alvina Heem; father, Dale Jackson; brother, Greg Jackson; and sister, Patty Jo Jackson. Also, to greet her was her beloved dog, Rainy. She left many behind that will miss her dearly. Her beloved husband, Tim Fisher of almost 15 years; her pride and joy, son, Ryan Tremain; mother, Sandy (Dave) Heem; father, Larry Heem; brother, Jeff (Sue) Bruce; sisters Jennifer, (Jed) Rohlf and Janelle (Ryan) Heem. Becky had a special bond with each one of her nieces and nephews. They adored her as much as she adored them. Nieces, Brianna, Allison, Paige and Rylie; nephews, Finn, Barclay and great-nephew, Greyson due to arrive March 2021 will miss going to “Camp Auntie’s”. She leaves behind a special uncle, Brad Bruce and family. Becky also leaves behind her bonus family, her stepchildren. Jayme Fisher; Melissa (Nick) Hagen; Mike (Lindsey) Fisher. The bond between a grandparent and their grandchildren is immeasurable. Becky adored her grandchildren. Carter, Carli, Logan, Sawyer, Adyson and Gage will miss her tremendously. For years, Becky longed to locate her paternal siblings. She was overjoyed when she finally was able to locate them over a decade ago. Their bond was instant like they had known each other for years. She leaves behind brothers David and Randy Jackson; sisters Shari (Brad) Johnson and Brenda (Leon) Jackson. Not only did she gain siblings, she gained more nieces and nephews; Crystal (Ben) Hackbarth, Chad Schmandt, Jeff (Corinne) Schmandt, Tyler Johnson, and Kaylee Johnson. Becky had many friends that were like family to her. She had a special friendship with Smiley. They were thick as thieves. Becky had a larger than life personality. Her quick wit and sarcasm made her stand out in the crowd. She was always the life of the party. Becky’s infectious smile and sense of humor could light up any room. Her love of family and friends was always on display when in her presence. You were always welcome at her house. Becky always put other’s first. Many summer evenings you could find her and Tim on the dock with a line in the water. Her most favorite place to be was the shack surrounded by family and friends sitting in front of a puzzle. From daily phone calls to family and friends, to fires by the river, to pontoon rides, to wheeler rides at the shack, Becky was the glue that held these groups of friends and family together. She adored her dogs; they were like family to her. She was happiest when she had a house full. But most of all, she was happiest when her son was home. A private ceremony will be held for family. A Celebration of Life will be held at a later date.

The family of Rebecca "Becky" Dawn Fisher created this Life Tributes page to make it easy to share your memories.

Send flowers to the Fisher family.