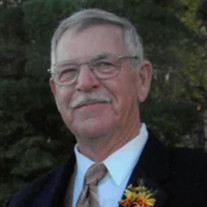 Richard “Dick” Alan Anderson, 79, of International Falls, Minnesota, passed away at his home on Tuesday, August 17, 2021 after a short battle with lung cancer. Dick was born on January 4, 1942 to Willis and LaVina (Barrette) Anderson, of International Falls. Dick graduated from Falls High School in 1960 and started working at the Post Office and retiring at 50 after 32 years. He was also in the Army and for a period of time was stationed in Germany, where he enjoyed traveling around Europe. He purchased a Volkswagen Beetle and shipped it home to I. Falls. Dick continued his Army career by joining the Army Reserves and continued that until his retirement of 20 years. After retiring from his full-time jobs- he then decided to work as maintenance at Kmart and Hardees. Not only that, he also drove school bus for District 361 for another 20 years and planted trees as well. To top it off, he also enjoyed another job testing brakes for Kelsey Hayes out on the ice roads. When Dick wasn’t working, he was volunteering. Dick volunteered at the Koochiching County Senior Center, as president and was a Meals on Wheels driver. He also, at one time or another, volunteered at Good Samaritan, Backus Community Center, and the Rainy Lake Sports Fishing Club. He was also a member of the Moose Lodge. In addition to working and volunteering, Dick enjoyed many hobbies: decorating for every holiday, having coffee with his buddies at McDonald’s, hunting, fishing, gardening, casinos, rummage sales, and family pets. Preceding in death were his parents Willis and LaVina Anderson; sister, Joyce Johnson; brothers, Maurice “Red” and Harold Anderson; and brother-in-law, Ron Brackin. Dick is survived by his wife of 49 years, Irene Anderson (Proszek); his son, Anthony “Tony” Anderson (Mary Ann Mann) of International Falls; daughter, Sarah (John) Heaton of Maple Grove, MN; four grandchildren, Ashley Anderson of Fargo, ND, Austin Anderson of Duluth, and Adele and Kylie Heaton of Maple Grove; brother, William (Doris) Anderson of Blaine; sisters, Mary Brackin of Coon Rapids, Diane (Jene) Christensen of Las Vegas, and Harriet (Les) Gosselin of Port Alberni, BC; sister-in-laws, Edith Anderson of Blaine, MN, Marge Anderson of Coon Rapids, MN, Linda Chezick (Proszek) of International Falls; and many nieces and nephews. A funeral service will be held on Saturday, August 21, 2021 at Green-Larsen Mortuary at 11:00 am. Following the service, interment will be at Forest Hill Cemetery with military rites. A luncheon will be held at the local VFW prepared by the auxiliary.

Richard &#8220;Dick&#8221; Alan Anderson, 79, of International Falls, Minnesota, passed away at his home on Tuesday, August 17, 2021 after a short battle with lung cancer. Dick was born on January 4, 1942 to Willis and LaVina (Barrette) Anderson,... View Obituary & Service Information

The family of Richard "Dick" Alan Anderson created this Life Tributes page to make it easy to share your memories.