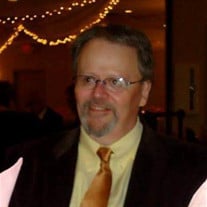 Richard William Forpahl, 64, of New Hope, Minnesota, died on Tuesday, June 4, 2019 at Methodist Hospital, St. Louis Park, MN. He was born October 11, 1954 at Minneapolis, MN to William and Gertrude Forpahl. Richard grew up in Minnetonka, MN; graduating from Hopkins High School in 1972. Richard studied culinary arts at the University of Wisconsin Stout; he spent a portion of his studies abroad in Switzerland. He was united in marriage to Ann Garfinkle on May 20, 1984. Along with his wife, Richard and Ann owned and operated Café MSP in the early 1990’s. He would later serve as a Professor at Hennepin Technical College teaching culinary arts. His favorite past times were spending time with his family, collecting cookbooks, traveling with his wife and going to their cabin in Wisconsin, remodeling his home and hanging out with his best friend Twig. He was preceded in death by his parents; older brother, Gerald Forpahl; sister-in-law, Caren Pelkey and the “Love of his Life,” Ann Forpahl. Survivors include sister-in-law, Paula Forpahl; nephew and niece-in-law, Derek and Jamie Forpahl; great nieces, Isabelle, Dahlia and Anne Forpahl; sister-in-law, Phyliss (Scott) Swonger; nieces and nephews, Samantha Swonger, Sarah (Mike) Roskos, Jacob Pelkey, Lindsey (Matt) Imhotle; great nieces and nephews, Mason, Cole, Rose and Tobias. The Funeral Mass of the Resurrection will be held on Saturday, June 15, 2019 at St. Thomas Catholic Church at 11:00 am. A visitation will be held one hour prior to the funeral service. Interment will be at St. Thomas Catholic Cemetery.

The family of Richard William Forpahl created this Life Tributes page to make it easy to share your memories.

Send flowers to the Forpahl family.