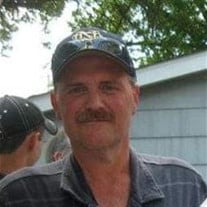 Richard “Dick” Howard LaVigne, 51, of International Falls, Minnesota, died on Monday, February 10, 2020 at his home. Dick was born on June 3, 1968 in Virginia, MN. His family moved in 1970 to International Falls where he grew up and graduated from Falls High School with the Class of 1986. He was united in marriage to Susan Begg-Hams on August 17, 2013 in International Falls. Dick was retired from Boise Cascade Corporation, and formerly of the International Falls and Koochiching County Sheriff’s Departments. He went to school at Rainy River Community College, Hibbing Community College and was ten credits away from his B. A. in Corporate Management. He participated in the Bronco football, hockey and baseball at Falls High School. Dick enjoyed riding his horse, Breezy, and loved to hunt and fish. He trapped many beaver and other furs. He also enjoyed baking, cooking, and grilling. He was a former Exalted Ruler of the Elks Club #1599 in International Falls. Dick was preceded in death by his maternal grandparents, DeCorsey’s, and paternal grandparents, LaVigne’s. He is survived by his wife, Sue LaVigne; son, Jared LaVigne (Brianna) of Duluth, MN; daughter, Ashley LaVigne (Bill Bacon) of International Falls; step-daughters, Melissa (Kenny) Wold, Kelly (Chris Nuthak) Hams, Samantha Hams; he was a proud grandpa of eight grandchildren; parents, Sandy and Gene Edberg, and Howard LaVigne, all of International Falls; brother “Howie” LaVigne of Hibbing, MN; and sister, Kathy LaVigne of International Falls; and many nieces and nephews. The Mass of the Resurrection will be conducted at St. Thomas Catholic Church on Monday, February 17, 2020 at 11:00 a.m. Recitation of the Holy Rosary will be at 10:00 a.m. Visitation one hour prior to service time. Interment will be at St. Thomas Catholic Cemetery, International Falls.

The family of Richard "Dick" Howard LaVigne created this Life Tributes page to make it easy to share your memories.

Send flowers to the LaVigne family.