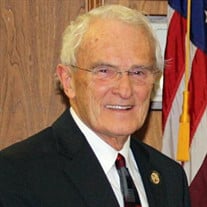 Robert Anderson, 77, longtime mayor and lifelong resident of International Falls, MN, died unexpectedly on Sept. 20, 2019. He was born on July 16, 1942 to parents Donald and Amber (Thompson) Anderson. After graduating from Falls High School in 1960, Bob married Carol Engelking and had three children. He was employed by Boise Cascade Corporation and after 51 years, retired in 2011 as the mill’s Public Affairs Manager. Inspired by his uncle Irv Anderson, a young Bob began a long civic and political hobby in his early 20s. Throughout his career, he served on the International Falls City Council, two times as mayor - including the current mayor, over 40 years as chairman of the Airport Commission (US DOT just announced the $16 million grant for additional improvements to the Falls airport), Rainy Lake Medical Center, Hwy 53 All the Way Task Force, current chairman of the State Senate-appointed seat on the Lessard-Sams Outdoor Heritage Council, many years on the Fourth of July Celebration, League of MN Cities past president, Minnesota Forest Industry Council, Rainy River Community College Foundation, TruStar Federal Credit Union Board of Directors, and Elks Exalted Ruler. In a recent interview, Bob summarized it best by saying, “I love my city having been born and raised here. Enjoy governance and helping others… My service to the city over the past 50 years has been a joy. My hope is that I have helped to make the city better in some small way because of my gift of time and my relationships with many of the business and political leaders throughout the state of Minnesota.” Bob always had a pocket full of International Falls City pins ready to hand out. In the winter he sported a “Ice Box Days” wooden pin on his jacket just waiting for someone to ask the details. When Bob wasn’t attending meetings in and around Minnesota, he was attending his grandkids’ activities and recently his great-granddaughter’s first day of pre-school. He enjoyed spending time at the Anderson Farm near Big Falls and deer hunting with relatives in his younger years always cooking and doing dishes. He loved to fly up to Trapper Bob’s fish camp and host groups of customers. He had two bucket list items that we are saddened will not happen. After Jenna graduated, he was hoping to see all the grandchildren’s graduations from Air Force Academy (Erik), Sherman Chiropractic (Jenna), St. Catherine’s (Emilee), UND (Jenna, Nick, Sydney) and to dance at their weddings. He was preceded in death by his parents, Donald and Amber, brothers Birket and Lee; in-laws John and Valeria Engelking. He is survived by his wife Carol of 59 years; children Robin (DeAnne), Cheri, and Rick (Tanya); grandchildren Nick (Jahnai), Erik, Jenna (Andy), Sydney, Emilee, and great-granddaughter, Brynlee. He is also survived by brother Don Jr., sisters Charlene (Kevin) and Arden, nieces, nephews and cousins. Visitation will be held from 5-7 p.m. Thursday, Sept. 26 at Green-Larsen Mortuary in International Falls. Funeral Mass will be at 10 a.m. Friday, Sept. 27 at St. Thomas Aquinas Catholic Church in International Falls. Memorials preferred to the Rainy River Community College – annual Anderson Scholarship Fund and Falls Education Foundation. The family is thankful for the outpouring of love and friendship. Bob will be greatly missed.

The family of Robert W. Anderson created this Life Tributes page to make it easy to share your memories.