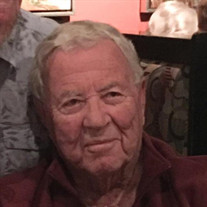 Robert Thomas Houska, 88, of International Falls, Minnesota, died on Monday, March 22, 2021 at Rainy Lake Medical Center. Bob was born on December 23, 1932 at Houska’s Point, Ranier, MN. He attended Ranier Elementary through 6th grade and graduated from Falls High School with the Class of 1950. Bob went on to further his education and graduated from the University of Minnesota in 1954. He served in the United States Army Security Agency from 1954, honorably discharged in 1956. Bob was employed and later owned F.E. Macartney Custom House Brokerage in Ranier. On October 12, 1951, he was united in marriage to his middle school sweetheart, Jean Breneman, at St. Paul Lutheran Church in International Falls. He was a charter member of the International Falls Jaycees, serving as president and other various positions. He was a member of the Philosopher’s Club, St. Paul Lutheran Church where he held a number of offices over the years, and was secretary of the National Custom House Broker’s Association. Bob enjoyed hunting, fishing, trapping, and snowmobiling. After retirement he loved traveling, and winters in Arizona. But, his favorite place to be was sitting on the deck at the cabin with his family and friends, enjoying the scenic view. Bob was very well known for his fun sense of humor. He was preceded in death by his father, Charles Houska; mother, Hazel; step-mother, Esther; brothers, Rodney, James; and sister, Elizabeth. Bob is survived by his wife, Jean Houska; son, Thomas (Lisa) Houska of Andover, Minnesota; daughters, Wendy (Dean) Crotty of Bemidji, Minnesota, Susan (Colin) Hewitt of Int’l Falls, Minnesota; seven grandchildren, Chelsey (Ryan) Paulson, Andy (Chelsey) Crotty, Patrick (Erika) Crotty, Kevin (Katie) Karsnia, Jared Karsnia, Petrea Houska, Charlie Houska; great-grandchildren, Rory, Brooks, and Payton Paulson, Morrison Crotty, Ollie and Kellan Crotty, and Adeline and Linnea Karsnia. A Celebration of Life will be held at the Ranier Hall on Saturday, August 28, 2021 from 1:00 to 4:00 p.m. with “Remembrances” at 2:30 p.m. If so desired, donations in lieu of flowers can be made to the charity of your choice.

The family of Robert Thomas Houska created this Life Tributes page to make it easy to share your memories.

Send flowers to the Houska family.