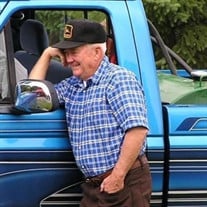 Robert Wayne Nelson, a lifelong resident of Birchdale, Minnesota passed away on Monday, Nov 9, 2020 at the age of 89. Robert was born in International Falls, MN to John and Joyce (McGillvray) Nelson on April 15, 1931. Robert, along with his younger brother, Ronnie, attended school in Birchdale and then Border following the Birchdale school fire. Following his school years, he was drafted in the United States Army on June 26, 1952, where he served his country during the Korean War. While in the Army he served with the The Army Corp of Engineers building roads and the airport near the town of Incheon, South Korea. Robert was honorably discharged on June 16, 1954. Robert continued to serve in the United States Army Reserve following his return home. Following his discharge Robert returned home to the family’s farm in Birchdale and began making a living farming and milking cows with the help of his mother, Joyce (little Grama). Soon after he met and fell in love with Deloris Ulrich. They were united in marriage on June 2, 1956 at the Birchdale United Congregational Church. They focused their life around the church, family, friends and their farm. While never having had children of their own, they helped raise their nieces, nephews, including special "niece" Rita Kay and many other “adopted” children, often hosting sleepovers, throwing birthday parties, and rarely missing any important events. Life on the farm was hard work, but Robert and Deloris always managed to find time to play a game of yatzee, clue, monopoly or a rousing game of ping pong. Robert and Deloris were special to so many people it makes them hard to list, as they were spread out from International Falls to Roseau, even extending across the Canadian Border. If reading this just made you smile, you know you are one of them. In the words of one of them, “for people who never had any children, they sure had a lot of children”! Over the years Robert’s work included: milking cows, farming, logging, hauling wood and gravel and doing dirt work. For many years Robert hauled wood for Erickson Timber and other local loggers. He was known for being the first truck on the landing in the early, early morning hours, If anyone tried to be there before him, he would just get up a little earlier! Because of Robert’s gravel business, he knew and befriended nearly everyone from Loman to Clementson. He usually knew when someone was moving into the area, building a house or putting up a shack, as they called him first for gravel or to dig a basement. He continued to haul gravel until he was 86 years old. Robert was a life-long member of the Birchdale United Congregational Church, a member of the Birchdale 4-H Club as a youth and a current member in good standing of the American Legion Post 217. Robert is preceded in death by Deloris, his loving wife of 60 years, his parents, John and Joyce Nelson, Deloris’ parents Alfred and Hattie Ulrich, his brother. Ronnie Nelson and brother in law, Duane Ulrich, nephew Del Robert Nelson, niece Linda Monkman and niece Phyllis Ulrich. Robert is survived by his sister-in-law, Loraine Nelson of International Falls and nephew Brian Nelson of international Falls, Nieces: Rhonda (Dennis) Jonson International Falls and Carrie (Keith) Hasbargen of Birchdale, Pam Rognerud of International Falls, also his sister-in-law, Norma Ulrich of Indus, nephews Donald Ulrich of Indus, Darrell (Joanne) Ulrich of Indus and niece Nancy (Mike) Leahy of International Falls, and Scott Monkman of Warroad. Along with many great nieces and nephews and great great nieces and nephews, Godchildren, Amber Nelson, Cameron Erickson, Karla Mayfield, Calli Rud, Grant Erickson and Robert’s special friends and caregivers, Richard and Della Fancher of Manitou. Visitation will be held on Friday, November 13, 2020 from 5-7:00 pm at Green-Larsen Mortuary. Funeral services will be held on Saturday, November 14, 2020 at 1:00 pm at the Nelson Farm located at 1754 County Road. 85, Birchdale, MN. It will be a drive up service with a loud speaker system available so no one will need to get out of their vehicles. The service will be live streamed on Facebook under the group, Robert W. Nelson's Funeral Service. https://www.facebook.com/groups/725630104717108 Per the Governor of MN Executive Order, the visitation and funeral service will adhere to current Covid-19 guidelines. If attending, please wear mask and proper social distancing will be followed. Robert will be laid to rest beside his wife in the Birchdale Cemetery, Birchdale, MN with full Military Honors presented by the Baudette Ceremonial Squad. In lieu of flowers please direct memorials to the Birchdale United Congregational Church.

Robert Wayne Nelson, a lifelong resident of Birchdale, Minnesota passed away on Monday, Nov 9, 2020 at the age of 89. Robert was born in International Falls, MN to John and Joyce (McGillvray) Nelson on April 15, 1931. Robert, along with his... View Obituary & Service Information

The family of Robert Wayne Nelson created this Life Tributes page to make it easy to share your memories.

Send flowers to the Nelson family.