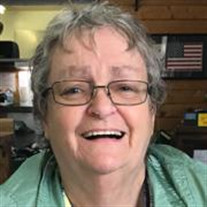 It is with heavy hearts that the family announces the passing of Shelley Christensen, age 69, of International Falls, Minnesota, at the Littlefork Care Center in Littlefork, MN. Shelley was born in International Falls to parents, Otto and Margaret “Peggy” Clarity. She was united in marriage to Marvin Christensen on January 8, 1968. Shelley was also in the U.S. Army Reserves. Shelley’s compassionate nature and caring heart lead her to pursue her career in caregiving. She began as a candy striper at sixteen years of age and later became a nurse’s aide. In her middle years, she succeeded in getting her counseling license and worked at Pineview as a drug rehabilitation counselor. Shelly had a true passion for helping people to recover as she herself had forty-two years of sobriety. She was always an active member of AA. In her spare time Shelley enjoyed many hobbies, playing upwords, reading the dictionary, and playing scrabble and cards with family, especially with her grandchildren and friends. Shelley always used to say “she collected people, not things”, as this lead to her having many “adopted” loved ones. She always considered the Golnick and Brackin families her second family. Her kind ways, quick sense of humor and her laughter drew people to her. In her younger years Shelley enjoyed gardening, and garage sales, collecting antiques with her husband Marvin. In her later years Shelly spent a lot of time traveling with her companion, Clifford Loveday. The two of them traveled every winter to California, stopping at numerous National Parks and casinos along the way. She was preceded in death by her parents, Otto and Peggy Clarity; husband, Marvin Christensen who passed in 2004; daughters, Roxanne, Christine; brother, Jack Clarity; brother-in-law, Jerry Nelson; and sister-in-law, Arlene Ysen. Along with many of her close friends, Shelley leaves behind her children, Cody Christensen and Jessica (Dan) Barker; grandchildren, Chris, Kayla, Ethan, Noah; sisters, Dianne (Chuck) Lamb, Jeannine (Jim) Nelson; sister-in-law, Sue Clarity; along with numerous nieces, nephews, and her longtime companion, Cliff Loveday. Shelley’s Celebration of Life will be announced at a later date.

It is with heavy hearts that the family announces the passing of Shelley Christensen, age 69, of International Falls, Minnesota, at the Littlefork Care Center in Littlefork, MN. Shelley was born in International Falls to parents, Otto and Margaret... View Obituary & Service Information

The family of Rochelle "Shelley" Clarity Christensen created this Life Tributes page to make it easy to share your memories.

It is with heavy hearts that the family announces the passing...

Send flowers to the Christensen family.