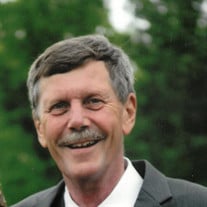 Roger Wayne Hanks, age 71, left us unexpectedly at home on September 13, 2021. Roger was born to the late Katherine Hanks on March 16, 1950 in Littlefork, Minnesota. He attended St. Thomas Catholic School in International Falls, Minnesota. At the age of 13, he went to live with his brother, Jim, in Montana and attended school for one year there. He then returned to International Falls and graduated from Falls High School in 1969. Roger started work in the Boise Cascade after graduation until he was called into service in 1970-1971. He served as a sergeant in Vietnam. He then returned to Boise Cascade where he retired in 2013. In 1978 he married the former Rhonda Nicholson, the love of his life who became his number one fishing partner for 43 years. Roger had a love of fishing, especially sturgeon, for which he was well known. Hunting was also a passion while waiting for that big buck. He spent many hours watching the river in front of his home to watch the wildlife swimming across. He was also into bird watching and studying their habits. The last seven years he loved to take his grandson, Hank, outside and teach him about all the wildlife they would see. Roger was preceded in death by his mother, Katherine Hanks; sisters, Darlene Hanks and Sharyon Kuryla; brothers, Jim and Dennis Hanks; sisters-in-law, Sharon and Rose Hanks; brother-in-law, Tom Hardwig; father-in-law, Warren Nicholson; and his mother-in-law, Shirley Nicholson. He is survived by his wife of 43 years, Rhonda Hanks; children, Jason Hanks, Lyndie Dufault, JoDee and Brock Lindvall; his special grandson, Hank Dufault; best friend and brother, Mike Hanks, also survived by brother, Dick Hanks; sister, Pat Hardwig; and his two lap dogs, Mikey and Dommy who miss him dearly. A graveside service will be held on Saturday, October 2, 2021 at 1:00 pm at Lindford Cemetery in Littlefork, MN. Following the graveside service, a celebration of life will be held at the VFW in Littlefork, MN.

The family of Roger Wayne Hanks created this Life Tributes page to make it easy to share your memories.

Send flowers to the Hanks family.