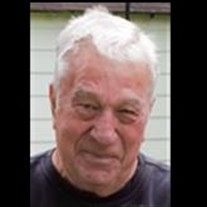 Ronald LeRoy Olson, age 79, of International Falls, Minnesota, passed away peacefully, surrounded by his family, Sunday, October 20, 2019 at Rainy Lake Medical Center in International Falls. He was born on February 24, 1940 to Janet and Olaf Olson in International Falls. Ron was a 1959 graduate of Falls High School. Ronald was united in marriage to the former Cordelia Grandaw on October 15, 1960 at St. Thomas Catholic Church in International Falls. The family moved to Oakdale, MN in 1967 and lived there until 1987 when Ronald and Cordelia purchased the Hill Top Motel in International Falls. Together the couple successfully ran the motel until they sold the business in 2002. Ronald later began driving bus for Arrowhead Transit and continued to do so for eight years, leaving a major impact on the community as many of the rider’s favorite driver. Ronald was a devout member the St. Thomas Catholic Church and a longtime member of the Knights of Columbus. Ron had many talents. He was well known for being a skilled handyman and had an innate ability to fix almost anything. When he was not hard at work, Ron could be found enjoying himself in his garage listening to music, creating his own mixtapes, or working on other projects. He also enjoyed hunting, fishing, and other outdoor activities. Ronald loved spending time with his loved ones. Of his many talents, his ability to show unconditional love for his family and friends was his greatest. He was preceded in death by his parents, Janet and Olaf Olson; wife, Cordelia Olson; daughter, Rhonda Olson; grandson, Quincy McMillon; brothers, Milton Olson, Harold Olson, Olaf Olson, Donald Olson; sisters, Marcelline Bohmer, Delores Olson, and Doris Currier. Ronald is survived by his three sons, Daniel (Dawn) Olson of New Berlin, WI, Douglas Olson of International Falls, Donald (Crystal) Olson of La Crosse, WI; sister, Karen Hedtke; seven grandchildren, Amanda, Kasey, Milton, Jake, Brooke, Andre, Arianna; five great-grandchildren, Adrian, Krystal, Alayna, Damon, Ryker; four step-grandchildren, Tiffany, A.J., Shawn, Ashley; four step-great-grandchildren, Cadence, Layna, Aydin, Zara, and many friends. Memorial services will be held at St. Thomas Catholic Church on November 23, 2019 at 10:00 a.m. Visitation will be held one hour prior to services.

The family of Ronald LeRoy Olson created this Life Tributes page to make it easy to share your memories.

Send flowers to the Olson family.