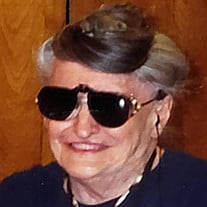 Ruth Angeline Skogstad passed away Saturday, Oct. 5, 2019, at Good Samaritan Society-International Falls, Minn. Ruth was born July 24, 1927, to Martin and Tillie (Bjorklund) Haugeland in Marshall County Minnesota near Karlstad. She was the youngest of five siblings. At the age of 5 she lost her mother to illness. She was then raised by her Norwegian father and her older twin sisters, Grace and Rose. She grew up on a farm west of Karlstad near where the annual Kick’n Up Kountry music festival takes place today. She fondly remembered her school closing during September each year so she could make money for clothes by picking potatoes in North Dakota. She graduated from Karlstad High School in 1947 after taking a year off of school to grieve the loss of her boyfriend who died in World War II. She trusted everyone in Karlstad and took special interest in their lives. Until her passing she subscribed and faithfully read the North Star News paying close attention to the “Out of the Past” column where she recognized her friends’ names without fail. In December of 1947, she married Gordon Skogstad from Pinecreek, Minn. Their first child, Mike, was born in 1948. They then moved to International Falls, where her second child, Lloyd, was born in 1949. They eventually settled at a five-acre plot on 15th Street — just shy of the city limits. There she raised her family of five kids: Mike, Lloyd, her twins, Ron and Roxanne, born in 1957, and the youngest Ruthlynn came along in 1965. When her husband Gordon passed in 1978, she was forced to get creative making ends meet. After selling the "home place" to her son, Ron she began attending Rainy River Community College. There she received her associate’s degree in 1982. She began writing short stories in college and continued to write the rest of her life on any paper she could find, napkins included. In the mid-1980s, she and her daughter Ruthlynn began travelling the country visiting places she had only dreamed of such as Hawaii and San Francisco and seeing her favorite country singers in concert. They saw her favorite, Johnny Cash, multiple times in many states. In later life, her love of country music only grew stronger and she religiously attended the Kick’n Up Kountry festival every June often reuniting with people from her past and their descendants. She continued to live an independent life until this year, when faced with illness, she had to reluctantly accept assistance. She spent her last three months at the home of her daughter, Roxanne. She saw the best in people when they needed it the most. She told her grandchildren, “There’s nothing you could do that I wouldn’t understand,” and lived by that promise. She was preceded in death by her parents, Martin and Tillie; her husband, Gordon; her son, Ron; her daughter-in-law, Ruby (Lloyd); siblings, Clarence, Edith (Melvin) Sylskar, Grace (Guy) Danielson, Rose Rhinehart, infant sister Francis; uncle, Cornelius; nephews, Milton Sylskar and Roger Zarling; all of her husband’s eight brothers and sisters; and her beloved wolf-dog, “Wolfie.” She is survived by her children, Mike (Boni) of Lodi, Calif., Lloyd of International Falls, Roxanne (Leon) Skogstad-Ditsch of International Falls and Ruthlynn Skogstad of Mountain Iron, Minn.; her grandchildren, Erik, Shaun, Lexi, Kyrsten, Tawni and Ryan; great-grandchildren, Ivy, Lita Rose, Jagger, Kingston and Hanaan; and great-great-grandchild, Ryder. A Celebration of Life for the immediate family will take place Tuesday, Oct. 8. A private memorial service will be conducted Friday, Oct. 11. In lieu of memorials, Ruth would like you to be kind to animals.

The family of Ruth Angeline Skogstad created this Life Tributes page to make it easy to share your memories.

Send flowers to the Skogstad family.