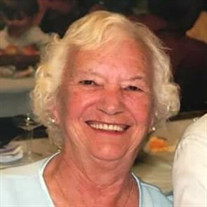 Shirley Ann Arnold, 81, of International Falls, MN died on Tuesday, December 11, 2018 at the Good Samaritan Society-International Falls. Shirley was born on May 20, 1937 in International Falls to parents Alfie and Alyce (Linsten) Belanger. She graduated from Falls High School in 1955 and remained a lifelong resident. Shirley married Phil Arnold on October 11, 1958 in International Falls. Shirley was a wonderful mother, grandmother, and friend. She was thoughtful, kind, and had a smile for everyone. She participated in activities through the years such as: card club, bowling, and curling. Shirley enjoyed spending her time going for walks around the neighborhood and to the cabin where she visited with family and friends, enjoying love and laughter. She loved traveling to places near and far around the U. S. and could always be found listening to her music and dancing along. She was a member of the VFW Auxiliary, the Elks Lodge, and the Zion Lutheran Church. She was preceded in death by her husband, Phil; her parents, Alfie and Alyce; sister, Sue Dougherty; brother, LeRoy Belanger; and infant brother, Ronald Belanger. Shirley is survived by her sons, Dennis Arnold of the Twin Cities, Tim Arnold of International Falls; daughter, Wendy Arnold of International Falls; three grandchildren, Amanda (Kelsey) Christianson, Brennan Humphry, Dayne Rasmussen; brothers, Lynn (Carol) Belanger of Ericsburg, Carl Belanger of International Falls; sister, Sharon (Chuck) Averill of International Falls; brother-in-law, Gary (Sharon) Arnold; and sisters-in-law, Joan Belanger, and Kay Arnold. A memorial service will be held at Zion Lutheran Church on Monday, December 17, 2018 at 2:00 p.m. Visitation will be one hour prior to service time.

The family of Shirley Ann Arnold created this Life Tributes page to make it easy to share your memories.

Send flowers to the Arnold family.