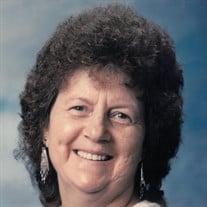 Shirley Esther Morin, 85, of International Falls, Minnesota, died on Wednesday, December 1, 2021 at her home. Shirley was born October 27, 1936 to Arthur and Signe Carlson in Pencer, Minnesota. She was a housekeeper most of her life before... View Obituary & Service Information

The family of Shirley Esther Morin created this Life Tributes page to make it easy to share your memories.

Send flowers to the Morin family.