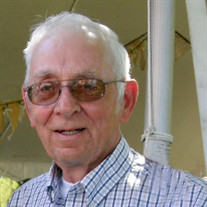 Stanley Charles Kuttes, age 85, left this world peacefully January 5, 2022, surrounded by his loving family. Stan was born August 18, 1936, in International Falls, Minnesota, to parents Charles and Hazel (Farmer). After graduating from Falls High School, he served in the U.S. Navy from 1957 – 1959. Stan attended the Dunwoody College of Technology following his military service while always keeping in touch with the girl next door, the love of his life, Lila Nygard. Stan & Lila were married Oct. 17, 1959, in the Evangelical Covenant Church in Int’l Falls. They moved to St. Paul while Stan completed his apprenticeship at Dunwoody. After a few years, they moved back to International Falls to their home on the Rainy River by Pelland Junction, within a mile from where they both grew up. Through the years, their home has been a center of hospitality for family and friends and of course, a lot of fishing. While Stan’s trade was an electrician, his talents extended far beyond. His hands on experiences prompted countless phone calls from people far and wide to talk through projects which often resulted in a trip or two to the “job site”, where he was truly in his element. He retired as co-owner/partner of Kantor Electric. As the expression goes, “the quality of one’s life is defined by the quality of their relationships,” and by that definition, Stan’s life was well lived. He developed a special bond with each of his grandchildren, showing them how to fully experience the outdoors up north including fishing techniques to reel in the big one. There are many stories where his quick thinking and ability to improvise saved the day from four-wheelers buried in mud to camping trips with essential gear left behind. He had a gift of connecting with people in his daily life which often included one of his humorous one-liners which always produced a smile. Stan was blessed with devoted friends who were like family. He will be remembered for his generosity and the immeasurable ways he helped others. Stan is proceeded in death by his parents Charles and Hazel and son, David. He is survived by his loving wife Lila of 62 years: his children Robert (Helen), Linda Finn (Mike), and Carol Chamberlain (Greg): Grandchildren Jonathan Kuttes (Rachael), Nicole Gullickson (Kellen), Joseph Finn (Zarah); Nicholas, Katherine & Michael Chamberlain: Great grandchildren Jack, Hazel, Vera, Jace, Jett, Jagger & Ahava. A memorial service will be held on Tuesday, January 11, 2022 at the Evangelical Covenant Church in International Falls, MN at 1:00pm. Visitation will start at 12:00pm. A livestream will be available through the IFalls Covenant Church Facebook page.

The family of Stanley Charles Kuttes created this Life Tributes page to make it easy to share your memories.

Send flowers to the Kuttes family.