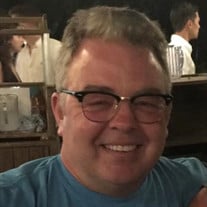 Steven Michael Bruess, 60, passed away on Wednesday, May 5th, 2021 at St. Mary’s Hospital in Duluth Mn surrounded by his loving family. Steve was born December 15th, 1960 to Donn and Margaret Bruess of Sleepy Eye Mn. He grew up on their family farm where he developed a passion for the farming craft. He loved to share stories of the time spent with his grandpa in the fields, driving the tractors, and raising the farm animals. Steve served four years in the U.S Navy. He returned to Sleepy Eye after his military service, worked several jobs and then moved to International Falls Mn in 1990 during the expansion of the Boise Paper Mill where he dedicated his career to Fagen Inc. eventually becoming Project Manager of the jobsite. Through mutual friends Steve met his wife JoDean (Jensen), they were married in 1993. They raised three children (Kayla, Alex, Morgan) in their lifetime family home just outside of town. From athletic events to dance recitals the dedication Steve showed to his children could not be questioned as he would do anything he could to support his children’s goals. One of Steve’s biggest hobbies was serving as Scoutmaster to a local troop with the Boy Scouts of America. He was always proud of the fact that his father Donn had been involved in his childhood troop, Steve was part of his son’s as well, seeing him through to his rank of Eagle. When Alex moved on from the troop Steve was asked countless times if he wanted to move on as well. His reply was always focused on his next promising kid that he “had to see through.” This mentality stuck for an additional 10 years where he remained Scoutmaster until the end, planning camping trips, organizing fundraisers, food drives, and fostering leadership to so many promising young men. In his later years Steve developed a love for Rainy Lake as most do who get the opportunity to experience it. This led to him purchasing a lake cabin where every summer was spent with family and friends. At the cabin, his main priority was to cater to all those who stopped by, offering a Long Island and a bite to eat. In-between entertaining, he would occasionally make time to find the fish. Fall and winters were for hunting and Steve spent his life in International Falls doing just that, a deer season was seldomly missed. His steadfast mentality and willingness to endure harsh fall temperatures to bag a buck was something his hunting partners admired him for. His willingness to sit all day routinely resulted in him getting a deer each year. His latest passion came from his pure joy of becoming a grandpa, His daughter Kayla announced she was expecting May of 2021. Unfortunately, Steve was unable to meet Jensen Dee Bowen born Sunday morning May 16th. It was the loving words of a close family member stating, “I keep seeing Steve kissing this little boy before he entered this earth.” No other words at this time could shine as much light during such a dark time. Steve is survived by his wife JoDean, his children, Kayla (Jesse) Bowen, Alex (Sydney) Bruess, Morgan (Brett) Burmeister, grandchild, Jensen, and numerous in-laws, nieces, and nephews. He was preceded in death by his parents, Donn and Margaret Bruess, brother William Bruess. A memorial service will be conducted at Green-Larsen Mortuary on Saturday, June 26, 2021 at 11:00 a.m. A luncheon will follow at the Philosophers Club.

Steven Michael Bruess, 60, passed away on Wednesday, May 5th, 2021 at St. Mary&#8217;s Hospital in Duluth Mn surrounded by his loving family. Steve was born December 15th, 1960 to Donn and Margaret Bruess of Sleepy Eye Mn. He grew up on their... View Obituary & Service Information

The family of Steven Michael Bruess created this Life Tributes page to make it easy to share your memories.

Steven Michael Bruess, 60, passed away on Wednesday, May 5th,...

Send flowers to the Bruess family.