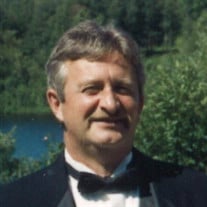 Terry Lee Shoquist, 72, of International Falls, MN, died on Friday, May 17, 2019 at his home. Terry was born on December 14, 1946 at the Littlefork Hospital to Fred and Frances Shoquist. He graduated from Falls High School with the Class of 1964. He served in the U.S. Army from 1968 to 1973. He had many stories of the time he spent while stationed in Korea. Terry was united in marriage to the former Julia Ann Carlson in International Falls on March 1, 1969. They were happily married for forty-three years and raised three children. Terry worked for the Koochiching County Courthouse in maintenance for thirty years until his retirement. He was well known for his helpfulness, and that he took pride in his job. He enjoyed watching hockey, especially “Hockey Night in Canada”. He loved ice fishing and gardening when he was feeling better. Terry liked to grow different types of vegetables and sharing with family and friends. In his later years he enjoyed feeding the deer, squirrels and bunnies in his yard. He had a special fondness for his five grand granddaughters and loved to hear about their activities. He was preceded in death by his wife Julia; parents; son, Paul Shoquist; sister, Janice; and a brother, Ray. Terry is survived by his son, Patrick Shoquist of International Falls; daughter, Christine (Stephen) Hagen of Littlefork, MN; grandchildren, Hannah, Bailey, Cassidy, Emily, and Kaylee; sisters, Bettymae Krienke of Fort Frances, Ontario, and Gail St. Germain of International Falls. A memorial mass with military rites will be held on Thursday, May 23, 2019 at the St. Thomas Catholic Church at 11:00 a.m. Visitation will be held one hour prior. Interment will be at St. Thomas Catholic Cemetery in International Falls.

Terry Lee Shoquist, 72, of International Falls, MN, died on Friday, May 17, 2019 at his home. Terry was born on December 14, 1946 at the Littlefork Hospital to Fred and Frances Shoquist. He graduated from Falls High School with the Class... View Obituary & Service Information

The family of Terry Lee Shoquist created this Life Tributes page to make it easy to share your memories.

Send flowers to the Shoquist family.