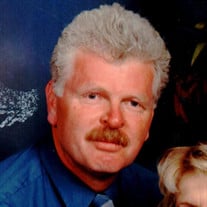 Thomas L. Carlson had aspirations of building a cabin in the woods, but the afternoon of Tuesday, March 31, 2020, he was called to a place in heaven prepared for him according to the words of Jesus, “In my Father's house are many rooms, if it were not so I would have told you. I am going to prepare a place for you. And if I go to prepare a place for you, I will come back and take you to be with Me that you also may be where I am.” (John 14:2-3) Yes, his dreams of earthly things, such as sharing more moments with his loved ones, were cut short because he lost the over-4-year battle with cancer, but he never stopped dreaming. He left that as a legacy to his family as well. He loved seeing and exploring God's beautiful creation and got to do a lot of that in his 69 years of sharing times with the love of his life, Cheryl , his wife of 48 years. He loved his family and friends and enjoyed sharing the days God gave him with them. It is with great sorrow we say good bye for now, but because Tom lived his faith in Almighty God he prepared his family for such a time of separation and loss. We do not grieve as those who have no hope, for we know we shall see him again. He left a legacy of faith as well as well as an example to follow. The Word of God was an anchor for Tom's soul. He believed as it is written in John 20:31 “...that Jesus is the Christ the Son of God and that by believing you might have life in His name.” Thomas L. Carlson was born May 29, 1950 in Littlefork, MN to Barbara (Babock) and Leo Vernon Carlson. His siblings were Donny, Jerry, Julie, Kathy, Eugene and Becky. He graduated from FHS in 1968 and went to work at the Boise paper mill. He enlisted in the US Army and served in Vietnam. From 1990-2013 he worked as a tour pipefitter, retiring after 41 years with Boise. On August 7, 1971 he married Cheryl L. Holt. Two sons, were born to them: Leo (Christie) and Joe (Jessica) Carlson. They were blessed with grandchildren Tessa, Emma Rose, Isaac and Noah from Leo and Colten, Jeremiah, Katelynn from Joe. An infant grandson, Isaiah preceded him in death as did his brother Jerry and both of his parents. Tom built his earthly house in Ray, Mn and was a member of Northwoods Bible Church where a celebration of his life will be held on Friday, August 7th. Interment will be at the Ray Cemetery. If so desired, memorials would be preferred to Northwoods Bible Church 2119 MN-217, Ray, MN 56669 or Fairview Healthline Hospice, 2716 Crescent Drive, Int'l Falls, MN 56649.

Thomas L. Carlson had aspirations of building a cabin in the woods, but the afternoon of Tuesday, March 31, 2020, he was called to a place in heaven prepared for him according to the words of Jesus, &#8220;In my Father's house are many rooms,... View Obituary & Service Information

The family of Thomas Lynn Carlson created this Life Tributes page to make it easy to share your memories.

Thomas L. Carlson had aspirations of building a cabin in the...

Send flowers to the Carlson family.