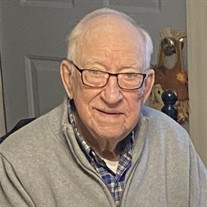 Chief Thomas F. Hardy (retired) 85, of International Falls, Minnesota, died on Thursday, December 5, 2019 at Essentia Health - St. Mary's Medical Center, Duluth, MN. He was born in International Falls on March 14, 1934 to parents Thomas Hector and Agnes Isabel (Ayotte) Hardy. He graduated from Falls High School in 1952. Tom was united in marriage to the former Clara Ann Chowan on June 12, 1954. He was a member of the International Falls Police Department for 35 years, rising from patrolman to chief. Due to his devotion to the job, he stayed on two years past his planned retirement date to help resolve the Boise Cascade Expansion Labor Conflict. Tom was Captain of the International Falls Fire Department. He also spent time as a private investigator for Hooper Holmes Investigations and O’Hanlon Reports. He enjoyed spending time at the hunting shack with his family and grandchildren. He was a dedicated family man who was devoted to his children, grandchildren, great-grandchildren, and especially to Clara, his loving wife of almost 65 years, whom he treated like a princess. Tom enjoyed being involved in his community. He was a member of the St. Thomas Catholic Church, Knights of Columbus-Council 1540, and a past member of the International Falls Rotary Club, and Salvation Army. He was an accomplished wood worker and carpenter, and has a working fish decoy displayed in the Smithsonian Institute National Museum of American History. Tom was also a member of the MN Police Chief’s Association, an Amateur Radio Operator-WBØVJY, and a volunteer with the Civil Air Patrol. He was preceded in death by his parents, Thomas and Agnes Hardy; mother and father-in-law, Bill and Blanche Chowan; grandson, Ryan Thomas Rapaway; and his beloved dog, the west highland terrier, Meggie. Tom is survived by his wife, Clara; daughter, Toni Rae (Robert) Rapaway; son, Thomas William (LeAnne) Hardy; four grandchildren, Andy Rapaway, Mandi Baron (Tommy), Joshua Hardy (Cristin), and Johnathan Hardy; great-grandchildren, Lyla Baron, Eamon Hardy, Hank Baron, and Jasper Hardy; sisters, Francine Lagerstrom, and Shirley Hull; sisters-in-law Linda Oustad, Jean Madsen, and Carol Lepper. The Funeral Mass of the Resurrection will be held on Thursday, December 12, 2019 at 11:00 am at St. Thomas Catholic Church. The Recitation of the Holy Rosary by The Knights of Columbus will begin at 10:00 am. Interment will be at St. Thomas Catholic Cemetery.

The family of Thomas F. Hardy created this Life Tributes page to make it easy to share your memories.

Send flowers to the Hardy family.