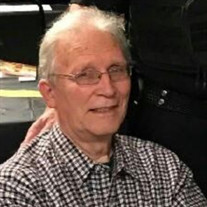 Wallace Edward Tilander, 85, of International Falls, Minnesota, died on Monday, August 9, 2021 at Bemidji Sanford Medical Center. He was born on February 7, 1936 at Beaver Township in Koochiching County, Minnesota. Wally graduated from Falls High School in 1954; he married Linda Ohotto on October 7, 1983. Wally loved his wife Linda and they were best friends. Wally enjoyed going to the hunting cabin with family where he enjoyed hunting, trapping and fishing. His family meant so very much to him. Wally was a computer programmer, he also worked as a carpenter and mechanic. Wally was a gambler manager and a member of the Loyal Order of the Moose. He was a member of the Gateway Assembly Church and a benefactor member of the NRA. He was preceded in death by his parents, Urho and Hazel Tilander; wife, Linda Tilander and many aunts, uncles and cousins. Survivors include sons, Kane (Val) Tilander, Jeff (Diana) Jeffries and Neil (Sheila) Ohotto; grandchildren, Joshua Jeffries, Justin Jeffries, Jennette (Daniel) Mummert, Donald Ohlquist and Jordan, Justin and Taylor Ohotto; brother, Terry Tilander; sisters, Opal Tilander and Judy Rosten; nieces and nephews, Robert (Deb) Rosten, Kathi (Doug) Hilfer, Shay (Melissa) Tilander, Shad (Jeanie) Tilander, Shawna (Ryan) Vine and numerous brothers-in-law, sisters-in-law and cousins. A memorial service will be held on Wednesday, August 18, 2021 at 11:00 am at Gateway Assembly Church in Int’l Falls.

The family of Wallace Edward Tilander created this Life Tributes page to make it easy to share your memories.

Send flowers to the Tilander family.