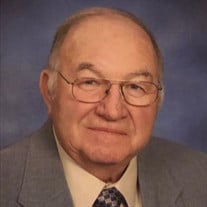 Walter Gordon Ettestad of International Falls Gordy was born on December 17, 1932, and lived until November 2, 2019. He was one of eleven children of Anna and Henry Ettestad of Wildwood, Minnesota. He went to school in Northome and graduated on June 1, 1951. He was active in high school sports, plays and Future Farmers of America. He began working for Mando Paper Company following high school graduation. He reported to work at Camp 29, and did line survey work, built roads, bridges, camps, and served as a rescue crewmember. In February 1953, he was drafted and served in the Army. He was stationed in Europe and worked as a mechanic in support of troops along the Russian border. Upon discharge in March 1955, he returned to work at Mando on the survey crew. His career included working as an internal auditor for Mando, establishing the accounting department for Insulite, being the corporate controller for the Woodlands division, and later becoming the Woodlands Division Administrative Manager. He retired from Boise Cascade after 44 years of service in December 1994. He married his high school sweetheart, Patricia Olmschenk, on September 3, 1955 and they welcomed three children Bryan of Eden Prairie, Lynn of Hugo, and Brad of International Falls. Gordy built the houses his family lived in during his “spare time” and also built a beautiful cabin for all to enjoy on Grindstone Island on Rainy Lake. He and Pat traveled to all fifty states, much of Canada, some of Europe and the Panama Canal. He taught his children to work hard, play hard, love with all your heart, forgive, fish and enjoy the great outdoors. Gordy enjoyed hunting, fishing, and wood-working. He loved spending time with his family and friends. While all of his nieces and nephews are loved, he had a special bond with Knute and Shirley’s children and loved them as if they were his own. He was active at First Lutheran Church and a member of the Finance, Stewardship, Endowment and Building and Grounds committees. He was instrumental in developing the endowment fund. He was also instrumental in saving Backus as a community resource and an active supporter of Backus Community Center. He gave the school board the dollar that was required for its purchase. He understood that communities are stronger when they have a place to listen to music, see a play, share talents and enjoy life. He was the past president of the Falls Curling Club, Koochiching County Men’s Garden club, was supportive of the Boy Scouts of America. He was preceded in death by his parents, Henry and Anna, brothers Archie, Knute, Myron, Milton and Howard, sisters Velma, Lila, and Eunice. He is survived by his wife Pat, son Bryan (Peggy), daughter Lynn and son Brad, as well as grandchildren, Amy (Jay), Adam (Tara), Anne, and David and great grandchildren Henry, Rose, Tessa Unitedt and Anders Ettestad. He is also survived by his brother Vincent (Pat) Ettestad of Two Harbors, his sister Rosalind (Alan) Nesset of Blackduck and his sister-in law Shirley (Knute) Ettestad of International Falls. His service is planned for Thursday, November 7, 2019 at First Lutheran Church, 123 Wayside Lane, International Falls at 1:00 pm. The inurnment will be at the Mizpah Cemetery on Friday, November 8, 2019 at 10:30 am. Memorials are preferred to First Lutheran Church of International Falls or Backus Community Center of International Falls or Rainy Lake Medical Center’s Infusion Center and Fairview Hospice of International Falls.

Walter Gordon Ettestad of International Falls Gordy was born on December 17, 1932, and lived until November 2, 2019. He was one of eleven children of Anna and Henry Ettestad of Wildwood, Minnesota. He went to school in Northome and graduated... View Obituary & Service Information

The family of Walter Gordon Ettestad created this Life Tributes page to make it easy to share your memories.

Send flowers to the Ettestad family.