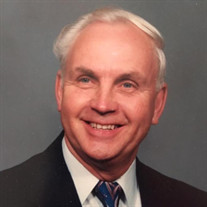 My Lifestory….by Wayne Ronning 09/28/1936 – 04/10/2021 Wayne Gerald Arthur Ronning, 84, of International Falls, Minnesota, died on Saturday, April 10, 2021 at Essentia - St. Mary's Medical Center, Duluth, MN. He was born in Duluth on September 28, 1936 to Carl and Helen Ronning. He had an older sister, Joan, born in 1935, and a younger sister, Donna (deceased), born in 1944, and also a younger brother, Bruce (deceased), born in 1942. They all grew up next to the Two Harbors Lighthouse Point. His dad and Uncle Norman Ronning built a large 36 ft. commercial fishing boat for Lake Superior. “Jerry”, who Wayne, liked to be called, went out on the lake with them many times. As children, he and his sister Joan sold smoked fish at Highway 61 in Two Harbors. They attended grade school and high school in Two Harbors once Carl and Helen moved their family uptown. After poor fishing conditions, his dad and Uncle Norman sold their big boat. His dad went to work for the City of Two Harbors. He was accidentally killed at work when a dump truck box collapsed while working underneath it. Wayne was fifteen years old at the time. Wayne graduated from Two Harbors High School in 1955. The day after, he got a call to report to the ore carrier, William Edenborn. He spent the next four years sailing the Great Lakes on several different boats, including the Eugene Pargny, the first diesel converted steam engine on the Great Lakes. At age 25 years old, he joined the Army Reserves. He went to Fort Leonardwood in Missouri for 8 weeks of basic training. After that, he spent sixteen weeks in advanced training at Fort Eustis in Virginia. From his work experience on the Great Lakes, the Army promoted him to wheelsman of a 300 ft. ship on the Atlantic Ocean as a training cruise part time. After being released from the Army in 1959, he moved to International Falls and went to work for Andy and Marie Johnson at the Falls Surplus Store. In 1961 he was called back to the service, with the entire Wisconsin National Guard, during the Berlin Germany Crisis and spent nine months at Fort Lewis, WA, before being released. In 1962 he met Betty Fulford (of Fort Frances, Ontario) at the Vets Club in International Falls and he asked her to dance. She asked him “are you married?” He said “no.” “Okay then, I’ll dance with you” she replied. Betty’s first husband lost his life with five others in the line of duty while serving as an Ontario Provincial Police Officer in Ear Falls, ON in 1958. Betty had three young children at the time. Wayne and Betty were united in marriage in 1963 in Emo, ON. They purchased the Falls Supply Store from Marie Johnson in 1965 and renamed it Ronnings Border Bargains, changing later to Ronnings. In 1970, they built their beloved cabin on Clearwater Lake, ON where they made many happy memories with family and friends. In 1979, the former Woolworth’s building was purchased and Ronnings expanded with two additional buildings in Hayward, WI in 1983. He sold the Hayward location to his step-daughter, Janet Hanzlik and her husband in 1998. Wayne and Betty retired to Hayward where Betty passed away in 2015. Wayne moved back to International Falls where he met and married Bev Nagurski in 2017. They were later separated. Wayne and Betty had one daughter, Jill (Mark) Ronning Bixby. Wayne had three step-children, Ralph (Gail) Fulford, both deceased, Janet (Martin) Fulford Hanzlik, and Linda (Gary) Fulford Skime. Wayne had nine grandchildren, nineteen great-grandchildren (one deceased), and two great-great-grandchildren. He also had many aunts, uncles, nieces, nephews, cousins and friends. At his request, no funeral services will be held. A Celebration of Life will be held at a later date. Memorials would be preferred to the charity of the donor’s choice in memory of Wayne Ronning.

The family of Wayne "Gerald" Arthur Ronning created this Life Tributes page to make it easy to share your memories.

Send flowers to the Ronning family.